Fresh From Prom, Hill Set To Date "The Lady In Black" 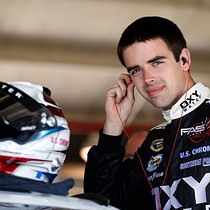 
Timmy and his girlfriend, Lucy Kennedy, attended prom at Ragsdale High School in Jamestown, North Carolina last Saturday night. This weekend, Hill will trade his tuxedo for a nomex firesuit and full-face helmet, strapping in his No. 32 OXYwater Ford for a date with another lady, the legendary  "Lady in Black," South Carolina’s Darlington Raceway.
"With Terry Labonte taking the wheel at Talladega, that left me with an off weekend," stated Timmy. "Normally I am at the racetracks supporting my other FAS Lane Racing teammates, but last weekend I stayed in North Carolina to go to prom. Lucy and I had a great time dancing the night away, but I am ready to get down with it at Darlington."
Hill, the 2011 NASCAR Nationwide Series Rookie of the Year, has two previous starts at Darlington in Nationwide competition; both Top-20 finishes.
"Darlington is a tough track, but I consider it one of my favorites," said Hill. "In my Nationwide Series rookie season, I didn't know what to expect. But after making my first laps on the track, I knew I liked it. I know that racing at Darlington in a Sprint Cup car will be a different challenge, but I am definitely up for it. With what I have learned already this year I look for another strong run in our No. 32 OXYwater Ford and my best finish of the year."
Posted by Dave Moody at 1:34 PM