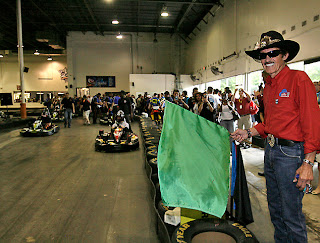 With the Coke 600 at Charlotte Motor Speedway looming, and NASCAR activities in and around the Charlotte-area ramping up, Richard Petty kicked off Charlotte race week Tuesday night by hosting the fifth-annual "King's Cup - Karting for a Cause" presented by D&B Motors and Xtreme Motorsports at Victory Lane Karting in Charlotte, NC.


Through this premier charity event, "The King" Richard Petty, NASCAR personalities and loyal sponsors have helped raise over half a million dollars to support Paralyzed Veterans of America ("PVA") and the veterans and families it serves. This year's event alone raised over $82,000. This event is critical in helping advance Paralyzed Veterans' mission to provide veterans services, and advocate for quality healthcare and civil rights for veterans living with spinal cord injury or disease.
"We are so fortunate to work with so many loyal partners and fans through the NASCAR community. This event is a time for honoring those who have sacrificed so much for this nation, and we're grateful to have so many folks come out and help raise funds and awareness for our mission" said Bill Lawson, President of Paralyzed Veterans. "A big thanks for everyone for making this event possible."
SPEED personality Bob Dillner emceed the evening festivities which included an autograph session with Petty, Aric Almirola, Marcos Ambrose, Austin Dyne, Max Gresham, Sam Hornish Jr, Joey Logano, Ryan Reed, a silent auction and competitive racing. The 18-team go-karting event was made up of NASCAR Sprint Cup drivers, teams, sponsors, others involved in the racing community, and this year, a professional football player, Carolina Panthers running back DeAngelo Williams.
Three-time King's Cup champions Stanley Racing had nothing for this year's King's Cup trophy honorees; Quicken Loans Racing. The six-person team lead most of the evening's final, one-hour "Shoot Out." Drivers Corey Lajoie, Ryan Flores, Dillon Silverman, Cliff Daniels, Evan York and Andrew Von Fange celebrated in Victory Lane with the coveted "King's Cup."
"I would like to thank all the sponsors, teams and fans that participated in support of Paralyzed Veterans, it's a great cause and Quicken Loans was proud to be part of a fun evening," said Todd Carte, Quicken Loans Director of Business Development.
In addition to the Petty and Penske family of drivers, David Gilliland, David Ragan and Matt Crafton all came out to participate and join in the fun, as well as upcoming racers Ross Chastain, Corey Lajoie, Coleman Pressley and Darrell Wallace Jr.
5th Annual "King's Cup - Karting for a Cause"
Finishing Order