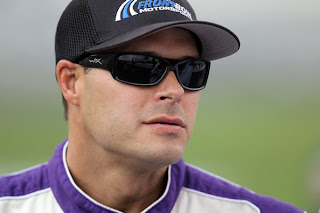 In a sport where second place is often referred to as “first loser,” David Gilliland may be the happiest runner-up in the history of NASCAR.


After pushing Front Row Motorsports' teammate David Ragan to the team’s first-ever victory last weekend at Talladega Superspeedway, Gilliland has been as much a part of the team’s celebration as the guy who crossed the line first.
In his fourth season with the Statesville, N.C.-based team, the driver of the No. 38 Long John Silver's Ford has watched the operation grow and progress each year. He has persevered in trying to get owner Bob Jenkins his first win, and now that the goal is accomplished, Gilliland turns his attention to winning  this week’s  next stop on the Sprint Cup Series schedule, the historic Bojangle’s Southern 500 at Darlington (SC) Raceway.
In six career starts at the 1.366-mile oval, Gilliland has one Top-20 finish, and said the momentum from Sunday’s Talladega run should pay dividends this weekend.
"We're still all smiling and in a great mood from Talladega,” he said. “It was just a huge day for Front Row Motorsports. We're a little team building (and) I feel like we're getting better each and every week. This new car has really helped us to be more competitive at every style of race track that we go to, so it's definitely big for us. I know Frank Kerr, my new crew chief, has a big `Wish List’ of parts and pieces he wants for our race car, trying to make them lighter and faster. I'm sure he'll get a couple of those (and) hopefully, that will help.
"I was trying to beat (Ragan) for sure, but we had to get there first. Once I pushed him out to the lead, the 99 was on my side and David had gotten enough of a lead that I wasn't going to pass him. At that point, I was trying to finish second. I've had some great finishes in restrictor plate races in the past and I still want to get that first win, but we'll take second for sure, and a first for our teammate.
"Darlington is an awesome racetrack,” said Gilliland. “It's unique. Richmond you can relate to Phoenix, Bristol you can kind of relate to Dover. Darlington, you can't relate it to anywhere. It's its own place, and there's no other racetrack in the country that's even close. It's a tough track (that) definitely lives up to its nickname each and every year. It's very challenging, but it's a lot of fun.”
He said teams cannot rely on one setup Saturday night, since the track changes as the evening wears on.
"The track changes as it rubbers up, and it's hard on tires, even after they repaved it,” he said. “I think it slows down a lot throughout the race and changes a lot between the practices and the race. So you have to look back on and rely on your notes to try to get as close as you can."
Posted by Dave Moody at 2:03 PM