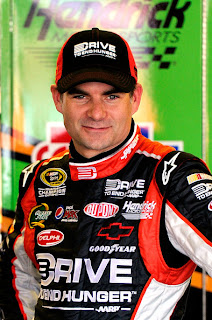 Jeff Gordon said today that fans may be in for a re-run of the Daytona 500 Sunday, when the NASCAR Sprint Cup Series races in the Aaron’s 499 at Talladega Superspeedway.


In the 2013 season-opener at Daytona, drivers elected to remain safe and maintain their equipment until the final 30-40 laps, before unleashing the three and four-wide draft in an effort to race to the front. The four-time series champion said he won’t be surprised to see more of the same Sunday.
“It was hard to pass in Daytona,” said Gordon. “And it’s not that it’s just hard to pass, it’s that nobody wanted to get out of line. Everybody protected their position until those crucial moments in the closing laps. I think that there could be some more of that this weekend and I made some mistakes by getting a little bit over-confident that we could make some moves with some other cars and drive to the front. Until we see that happen here, I think it’s going to be more of start up front, try to have good, solid pit stops and strategy and stay up front and go after it in the closing laps.”
“The only thing that is different is this is a wider race track,” Gordon said. “You don’t have to worry about handling, where handling was a little bit of an issue at Daytona. You might be able to push a little bit more aggressively and we’ll look at the temps, but I think it’s going to be just as challenging and difficult to jump out of line and to get a line formed on the inside. It certainly could happen, and it could have happened at Daytona, it just didn’t seem like enough guys really wanted to get organized to do it.”
With the weather forecast calling for a 90% chance of rain tomorrow, Gordon said posting a fast practice speed today becomes much more important.
“Obviously, we are going to put a lot of effort into going fast in this practice session, which means you’re going to have to work the draft,” he said. “We want to make sure that we’re starting up front. It’s not crucial here, but it’s important. And with what we learned in Daytona, I think track position is more important these days at a restrictor plate race than they used to be.”
If qualifying is rained out, the field for Sunday’s race will be set based on practice speeds.
“If we didn’t practice at all, it wouldn’t even affect my mindset,” he admitted. “I don’t think we’re going to learn a lot in practice, so it is kind of exciting that we’ll be able to go out there with a purpose for a potential starting position for tomorrow. It will be interesting to see how that plays out.”
He said he was unsure whether the four-car Hendrick Motorsports stable will risk drafting together this afternoon, saying, “If that’s what’s going to help us start up front tomorrow, then we’ll do that. We’re going to consider all options, but we’re actively going to work the draft to try to go fast. Typically, we would just go out there and see how the car is in the middle of the draft and look at our temps, look at our handling and look at the options of pushing or not pushing, being pushed and all those things.
“We’ll still do some of that, but we’re also going to try to put up a fast number.”
Posted by Dave Moody at 4:02 PM