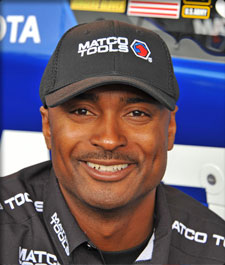 
Brown, the first African-American to win a major auto racing championship, will test alongside NASCAR Drive for Diversity drivers Bryan Ortiz, Daniel Suarez, Mackena Bell and Ryan Gifford.
Brown said he has been interested in stock car racing for many years, but has never been offered the opportunity to test a quality car.
“I know I can go straight,” said Brown. “Now I’ve got to see if I can throw a left-hand turn in there. You know, I drive for four seconds at a time right now. So this is a lot different. I know there is a big learning curve. We are just trying to take that step to see if I can do it.”
Brown would not admit to a desire to run NASCAR full-time, or much of anything else beyond Tuesday’s test session. But he acknowledged that he wouldn’t be doing the test if it weren’t with a top team that he felt had the ability to take him to the next level.
“Rev Racing helps train drivers, not just go out there in great race cars,” Brown said. “They involve them in all aspects. That’s what really intrigued me. That if I want to get the chance to go oval-track racing, I was going to have a good shot at going out there and learning from this experience. I have positioned myself with a great team.”
Rev Racing CEO Max Siegel was excited to have Brown on board with his team, which is well known for its diversity efforts.
“We have the opportunity to work with one of the great talents in motorsports,” said Siegel. “We have worked for three years now with Antron, and now is the right time for this. We have been part of NASCAR for the last five years with the Drive for Diversity program. We are very proud of what we have built. We have a pretty robust driver development program. We have the opportunity to work with a great ambassador to motorsports, and we have the opportunity to help him with his pursuit of NASCAR.”
“I have never been one of those people who just want to jump to (the top level),” said Brown. “I just want to get through the test session, take it one step at a time, be really focused on it and get everything I can get out of it. It would be great to actually race in a race one time.
“We are going to test a K&N car and then eventually do some Late Model stuff down the road.
Posted by Dave Moody at 2:53 PM