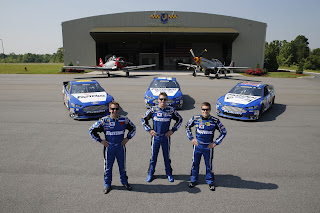 Held each year on Memorial Day weekend, the Coca-Cola 600 at Charlotte Motor Speedway presents an opportunity for the NASCAR community to express appreciation for our country’s military forces. This year, Fastenal will honor military service men and women -- both active and retired -- with a three-car tribute on the No. 16, 17 and 99 Roush Fenway Racing Ford Fusions.


The Fastenal Tribute Cars will feature the names of current Fastenal employees who served in the military. David MacFadden (First Sergeant, U.S. Army) will be displayed on the hood of the No. 99, and Brian Ashbee (Chief Quartermaster, U.S. Navy) and Anthony Phillips (Private First Class, U.S. Army) will see their names on the hood of the No. 17.
The displays are part of Fastenal’s “Heroes Hired Here” campaign honoring employees who are active or retired military members. MacFadden, Ashbee and Phillips were the Top-3 finishers in a Fastenal employee essay contest. As the contest winner, MacFadden will also receive a trip for two to the Bank of America 500 in Charlotte on October 12th. Fastenal will be posting the winners’ stories on the Fastenal Racing Facebook page this week.
“We’re extremely proud of the hundreds of former and current military personnel who are part of the Fastenal Blue Team,” said Fastenal President Lee Hein. “The Tribute Cars are a small way of expressing our gratitude to them and all of the men and women who have served our country.”
This is Fastenal’s second season in the NASCAR Sprint Cup Series as the primary sponsor for Carl Edwards in the No. 99 Ford Fusion and second year sponsoring three Cup cars in the Roush Fenway Racing family for the Coca-Cola 600.
Posted by Dave Moody at 7:45 PM