After Whirlwind Week, Ragan Back To Reality 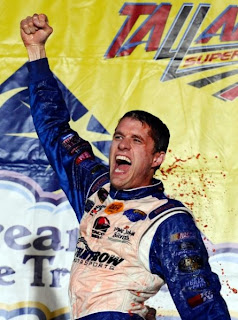 After a whirlwind week spent celebrating a reliving his upset victory in the Aaron’s 499 at Talladega Superspeedway last Sunday, David Ragan is back at work today at Darlington Raceway, trying to turn the momentum from his win into another strong weekend.


“This week has been exciting,” said Ragan, who led teammate David Gilliland to a stunning 1-2 finish for Front Row Motorsports at Talladega. “It’s been fun, which is a good thing. This is one of my favorite stretches – Talladega, Darlington and two weeks in Charlotte – so it’s been a great week.
“I really haven’t had time to celebrate,” he admitted. “I had a few commitments on Tuesday and Wednesday – a lot of media stuff on Monday – but the next few weeks in Charlotte, preparing for the All-Star Race and the Coca-Cola 600, we’ll have some time to spend with all the employees at the Front Row Motorsports shop and visit with some friends and family a little bit.”
Ragan said the win has raised the morale of his entire team, and delivered some unexpected perks, as well.
“Our guys have definitely eaten well this week,” he said. “Sprint provided breakfast one morning. We bought the guys lunch. The Roush Yates Engine shop bought them lunch one day, so they’ve had free food and good food all week, (and) it definitely helps the attitude.
“It’s such a different scene from a larger team to a smaller organization. We’ve got 50-60 employees and other teams have 300-400, so every single one of our guys had something to do with that race car. Every one of them touched it, worked on it, prepared it, set it up, painted it and loaded it up. Everyone had a part in it, so I think everyone feels a little bit more gratified getting that win with a smaller program. 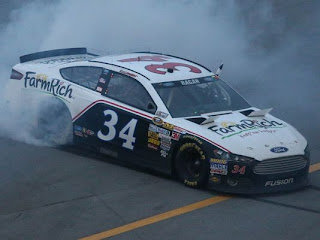 “And (it was) a 1-2 finish,” he reminded. “It wasn’t like we won and the other two guys were 35th and 40th. We were all competitive, and a 1-2 finish for Gilliland and I was unreal. That’s a big deal for a larger team. It was certainly a big day for us Sunday and we enjoyed it, but we also realize that reality sets in pretty quick. We’re here at Darlington (and) it’s a tough race track. You have to have a lot of respect for this place and we’re working hard trying to get our Ford to drive good so we can race good tomorrow night.”
Ragan said NASCAR’s new Gen-6 race car has been a big equalizer across the board, not just at superspeedways like Daytona and Talladega.
“If you look at the cold hard facts… James Finch’s single-car team is up pretty high up in points. The Front Row Motorsports and Germain Racings of the world have made a small step forward. I think the field is definitely narrow (and) there have been more lead-lap cars on the track. (We) look at our points and it’s a lot more than it was this time a year ago. Everything is tighter, and I think kudos go to NASCAR and everyone for making that happen.
“Every team is going to learn at a different rate,” explained Ragan. “We’ve got to keep working hard and looking for what the next `speed thing’ is for the Gen-6 car, but I think the new car has proved it’s a better equalizer. And then, Daytona and Talladega are big equalizers with the draft. You can’t do anything on your own, you have to have help. You have to have friends (and) you have to have teammates.
“We’re not going have a chance to win 15 races this year, but (winning) gives confidence to our guys. They all work hard and they realize that everyone has a part in the race. You create your own luck a lot of times, and we did everything the way it should have been. We put ourselves in position and we deserved that win as much as if Jimmie Johnson or Carl Edwards would have won that thing.”
While Regan Smith pulled off a major upset at Darlington two years ago, Ragan said a second-consecutive victory for his Peanut Patch Boiled Peanuts Ford team is “not a realistic expectation. Our expectations are finishing on the lead lap; a Top-15 or Top-20 finish would be a great day. But again, a perfect storm could happen.
“The year Regan won, he stayed out with a little different pit strategy at the end and put himself in position. At the end of these races, there are always five or six guys that can win given the opportunity, so you never know. We may put ourselves in position. We may play some strategy at the end. I’m not going to say it couldn’t happen, because it certainly can, but we want a Top-15 (to) keep gaining some momentum.
“We want to take some small steps. We’re not trying to jump over the whole pond just yet.”
Posted by Dave Moody at 5:22 PM