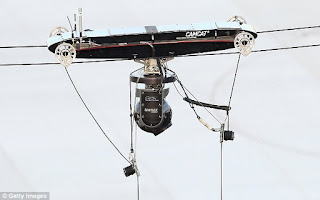 
Such was the case last night at Charlotte Motor Speedway, when the nylon drive rope used to propel FOX Sports’ overhead CamCat camera system snapped during the running of the NASCAR Sprint Cup Series Coca-Cola 600.
The nylon rope fell onto the race track and into the grandstands, causing minor injuries to 10 spectators and damaging the race cars of leader Kyle Busch, Marcos Ambrose, Denny Hamlin and Mark Martin. NASCAR threw the red flag to remove the rope from the race track, before announcing an unprecedented, 15-minute repair period for teams to fix what they called “relevant damage” from the incident.
“It was like getting attacked by a giant squid,’’ said Ambrose, who had a rear brake line torn loose by the rope. “It was flapping and I didn’t know what was going on. Then it got caught up in the rear end and I lost my brakes.” 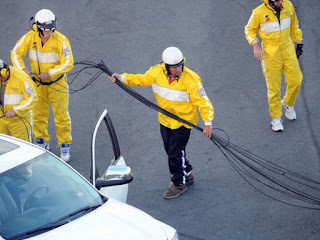 Not since a sudden downpour caused a multi-car crash on the opening lap of the 2001 All Star Race has the sanctioning body suspended protocol and allowed teams to repair their cars under the red flag. NASCAR went a step further Sunday, ruling that each machine would return to the racetrack in the same place it had been running prior to the stoppage.
FOX anchorman Chris Myers quickly apologized for the delay, and the network issued an additional written statement, saying, “At this time, we do not have a cause for the failure of the camera drive line that interrupted tonight’s Coca Cola 600 at Charlotte Motor Speedway, and our immediate concern is with the injured fans.
“The camera system consists of three ropes -- a drive rope which moves the camera back and forth, and two guide ropes on either side. The drive rope failed near the Turn 1 connection and fell to the track. The camera itself did not come down because guide ropes acted as designed. A full investigation is planned, and use of the camera is suspended indefinitely.
“This camera system had been used successfully at this year’s Daytona 500, last week’s NASCAR Sprint All-Star Race and other major events around the world. We certainly regret that the system failure affected tonight’s event, we apologize to the racers whose cars were damaged, and our immediate concern is for the race fans. We also offer a sincere ‘thank you’ to the staff at CMS for attending to the injuries and keeping us informed on this developing situation.
“When we have more information on the cause of the equipment failure, we will share it with you immediately.’’
Speedway officials confirmed that of the 10 injured fans, seven were treated and released at track Care Centers for minor cuts and abrasions. Three others were transported to a local hospital for observation and later released.
Posted by Dave Moody at 12:40 PM