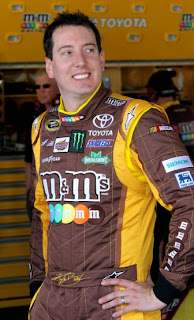 If there was one person who best embodies the “bring me back the trophy or the steering wheel” attitude surrounding Saturday night’s NASCAR Sprint All-Star Race at Charlotte Motor Speedway, it would be Kyle Busch.


Busch, will drive the No. 18 SNICKERS Bites Toyota Camry Saturday night, after locking in his spot in this year’s All-Star Race by winning one race in 2012 and two so far in 2013. This year’s wins came at Auto Club Speedway in March and Texas Motor Speedway in April, putting Busch solidly into a field  comprised of 2012 and 2013 Sprint Cup race winners, past All-Star Race winners and former series champions.
Busch’s Texas win was the 26th of his Sprint Cup career, part of 112 career wins in NASCAR’s Sprint Cup, Nationwide and Camping World Truck divisions. He was regarded as a potential star when he entered the Sprint Cup ranks full-time in 2005 as an 18-year old, and has quickly transformed that star potential into bonafide All-Star status since joining Joe Gibbs Racing at the beginning of the 2008 campaign.
Now in his sixth season with JGR, he says his approach to Saturday night’s All-Star Race will be different, as he throws patience out the window in the non-points event.
“Being aggressive -- knowing when to be aggressive and how to be aggressive -- is the biggest thing,” he said. “It’s a race where you have to get to the front and get yourself in clean air in order to (stay) out front and on your own.
“I’ve been aggressive (in the past); maybe too aggressive at points and not aggressive enough at other points. Last year, we just ran a clean race, didn’t really do much aggressive driving and ended up fourth. Maybe there was a little bit more that needed to be done, but overall, it was a good week there for us last year.”
Busch said the 2013 season is off to a flying start; not just for him, but for the entire JGR stable.
“All three teams have been fast this year and I expect that with Denny (Hamlin) back, we should be strong with communication between the three of us. It really comes down to everyone at the shop working hard and working together,” he said. “They’ve given us cars fast off the truck every week. I think it’s motivated those guys even more, and I’m sure we’ll be strong again the next couple of weekends.
“I’ve never won a Cup race at Charlotte, so it would be pretty awesome if we could win one Saturday night with our SNICKERS Bites Camry.”
Whether Busch brings back the trophy or the steering wheel, it’s a safe bet he’ll be exciting to watch.
Posted by Dave Moody at 3:42 PM