Moffitt To Drive No. 13 ThorSport Toyota At Kentucky 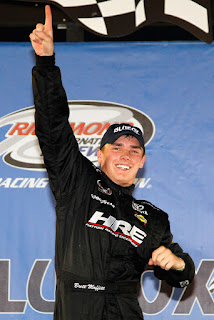 Moffitt currently leads the K&N Pro Series East standings with four Top-5 finishes in six starts, and sources say negotiations are nearly complete for him to fill the seat in the No. 13 Truck for next week’s UNOH 225 at Kentucky, on a one-race basis.
Bodine has run seven races this season in Duke and Rhonda Thorson’s Sealmaster/Mattei Air Compressors Toyota, with a top finish of 11th at both Daytona and Martinsville. Moffitt reportedly brings sponsorship for the Kentucky race, with Bodine expected to return to the Truck in the series' next start at Iowa Speedway on July 13.
ThorSport Racing General Manager David Pepper declined to comment on the deal earlier today. Bodine was unavailable for comment.
Posted by Dave Moody at 1:49 PM