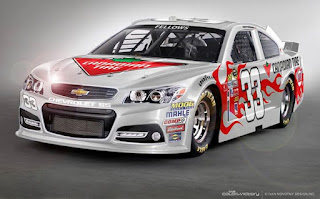 Fellows, a native of Toronto, Ontario, and will be inducted into the Canadian Motorsport Hall of Fame in September, has six NASCAR victories to his credit in NASCAR Nationwide and Camping World Truck Series competition. He is intent on joining the list of 23 drivers to win a race in each of NASCAR’s three major touring series.
“I'm really excited about driving the #33 Chevy SS for Circle Sport Racing and proud to have the iconic Canadian Tire red triangle on the hood,” said Fellows. “Joe Falk and his team have a great relationship with Richard Childress Racing, and with the opportunity to test the new generation Sprint Cup car at tracks on the NASCAR schedule, it was a deal I felt I wanted to be a part of and so did Canadian Tire.”
An accomplished road-course driver that has experienced success in every discipline of racing, Fellows has wins in the 24-hour classics at Le Mans and Daytona, NASCAR Truck and Nationwide stock car competition, and three championships in the American LeMans Series. In 23 NASCAR Sprint Cup Series races over a span of 15 years, Fellows has recorded a pair of runner-up finishes at Watkins Glen in 1999 and 2004.
“To have a driver of Ron’s experience and ability behind the wheel of the No. 33 Canadian Tire Chevrolet at the road course events is another milestone in our program,” said Circle Sport team owner Joe Falk. “Ron’s longtime affiliation with GM Racing and our relationship with RCR made this possible, and we’re looking forward to giving Ron the opportunity to add to the list of his accomplishments in his racing career.”
“Canadian Tire has a long history of supporting racing and motorsport in Canada and we’re incredibly proud to be part of this exciting Sprint Cup opportunity south of the border,” said Landon French, Vice President, Sport Sponsorship, and Canadian Tire. “The chance to partner with Ron Fellows, a Canadian racing legend at the highest level of sport, is a rare honor and we’re excited to see him behind the wheel of the #33 Chevy. We wish Ron the best of luck at Sonoma Raceway and Watkins Glen this summer.”
Posted by Dave Moody at 2:28 PM