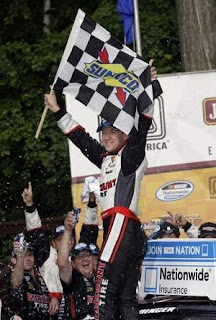 For AJ Allmendinger, the last 12 months have been one hell of a ride.


Saturday at Wisconsin’s Road America race course, Allmendinger completed his climb back from rock bottom, holding off spirited challenges from Justin Allgaier and others to claim his first career NASCAR victory in the Johnsonville Sausage 200 Presented by Menard’s.


It was a performance that seemed impossible less than a year ago. On July 7 of last year – just hours before taking the green flag for Penske Racing in the NASCAR Sprint Cup Series Coke Zero 400 at Daytona -- the Los Gatos, California native was suspended indefinitely by NASCAR after failing a random substance abuse test. He ultimately admitted taking a single tablet of Adderall, an amphetamine included on NASCAR’s list of banned substances, and was released by Penske.
Despite completing NASCAR’s Road To Recovery program and being reinstated by the sanctioning body, Allmendinger has struggled to resurrect both his life and his career.
It hasn’t been easy. He returned to make four starts in James Finch’s Phoenix Racing Chevrolet late last season, but a best finish of 24th produced no solid offers for 2013. A rumored return to Indy Car Racing with longtime friend and team owner Michael Shank failed to materialize, leaving him to piece together whatever he could in an attempt to keep his flickering hopes alive.
Through it all, two things never wavered. Allmendinger’s determination to put his troubled past behind him and Roger Penske’s willingness to help him do so.
With no vacancies in his NASCAR stable, Penske offered Allmendinger the next-best thing; an opportunity to return to Open Wheel competition with a pair of fully sponsored starts at Barber Motorsports Park and in the legendary Indianapolis 500. 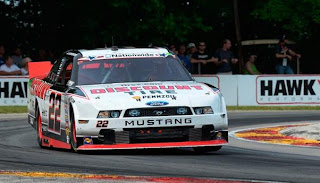 He contended for the win at Indy in May, leading the 500 until his seat belts inexplicably came loose at speed, forcing him to pit road under green and relegating him to a “what might have been” seventh-place finish.
“With seven or eight laps to go, I thought we still had a shot to win it,” said an incredulous Allmendinger afterward. “But we just didn’t have enough at the end.”
In the aftermath of his eye-opening Indy effort, Allmendinger made five Cup Series starts for James Finch’s Phoenix Racing and another for JTG Daugherty Racing, with a best finish of 11th. Not bad, but certainly not enough to put his name at the top of any team owner’s “must hire” list.
Saturday at Road America, however, the stars finally aligned. At the wheel of Penske’s potent No. 22 Discount Tire Ford Mustang, Allmendinger qualified on the pole in his first Nationwide Series start since 2008. He won a spirited early battle with Joe Gibbs Racing’s Aussie import, Owen Kelly, and survived a minor off-road excursion to race in the Top-5 throughout the event.
He took the lead for the final time with 11 laps remaining, utilizing a testosterone-rich crossover move on leader Justin Allgaier in Turn 5, before driving away to a comfortable, three-second lead.
"I knew the car was quicker than everybody's," said Allmendinger. "If I could get in the lead, they weren't going to pass me unless I made a mistake.
Three late restarts – two when late crashes sent the race to overtime and made fuel mileage a worry – provided plenty of drama in his rearview mirror, but no real challenges for Allmendinger. He took the checkered flag a comfortable 1.3 seconds ahead of Allgaier, then cut some celebratory donuts on the same patch of asphalt that hosted his victory burnout following a Champ Car World Series score a lifetime ago, in 2006.
Predictably,  Allmendinger’s first thoughts  in Victory Lane were of the man who almost singlehandedly allowed him to resurrect his driving career.
"What Roger has done for me career-wise is great,” admitted Allmendinger afterward. “But personally it has meant a lot more to me. After what happened last year, I wouldn't have thought twice if he had written me off. I didn't expect anything from him, but he called me constantly making sure I was OK.
"It was nice to have somebody that I could bounce ideas off of,” he said. “Not about racing, but life ideas, to try and figure out where I was going."
Penske was not on hand to share in the celebration, traveling instead to Iowa Speedway to oversee his Indy Car Series teams. But Allmendinger made it clear that a telephone call would quickly be made to thank the man known simply as “The Captain.”
"It's been a difficult ride," admitted Allmendinger of the last 12 months. "There have been lots of ups and downs, but it's cool to win one for Roger.
“To be able to say, 'Thank you, boss. I got one for you,' is really special."