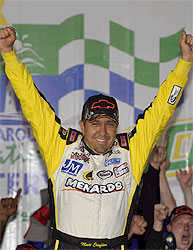 Matt Crafton has 14 career NASCAR Camping World Truck Series starts at Kentucky Speedway, most of any series driver. In Thursday night's UNOH 225 -- the Truck Series' eighth race this season – he will also extend his series record for consecutive starts to 301.


Crafton has a series-best nine Top-10 finishes at Kentucky, including a pair in 2012. The fact that Crafton currently holds a 23-point lead in the Truck Series' standings over rookie Jeb Burton makes a pretty positive combination for the Tulare, Calif., native.
"Kentucky's definitely one of my favorite racetracks to go to -- it's just an awesome place to race," said Crafton. "It's got a lot of character, it's rough and it makes you move around to find a place your truck likes to run in.


"It makes all the drivers and crews work really hard on their stuff, because it's really rough and hard to get ahold of, so finding the right setup to make your truck handle is really a chore. But it's a cool racetrack."

"They are two more guys you're going to have to beat, no question,” he said. “Kyle is good in everything he gets in, everywhere. But you can't forget the competition we're faced with each and every week in the Truck Series; the usual suspects we have to deal with everywhere.
"Sometimes we're able to out-run Kyle, sometimes not. We were real close to beating him at Dover, but he was just too strong in the end. We've just to keep working on our stuff and making it better and better each and every week."

Crafton has taken consistency to a new level this season, thanks to crew chief Carl "Junior" Joiner, who is in his second full season as crew chief of the No. 88 Toyota. His seven-race string of Top-10 finishes is the third-best of his career, behind a string of 19 consecutive top 10s from 2010-2011 and 10-in-a-row from 2009-2010.
"We have absolutely taken our game to another level this season," Crafton said. "The chemistry we've got on this team is incredible. Me and Junior have always been able to work together well, but this is the second year he's been with all the guys and the chemistry and communication they have is something special."
Posted by Dave Moody at 4:35 PM