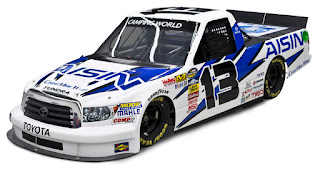 
Moffitt, 20, a native of Grimes, Iowa, is currently second in the K&N Pro Series East title chase and has nine victories in 54 career K&N East starts. In those 54 starts, he has finished in the Top-5 33 times and in the Top-10 40 times.
Moffitt has never finished worse than third in points in four full K&N East seasons, and will make his Kentucky Speedway debut on the longest oval track on which he's ever raced. A year ago, he finished ninth in his NASCAR Nationwide Series debut at Iowa Speedway, and he claimed a 10th-place finish in ARCA competition at Rockingham Speedway in 2009, at age 16.
"Brett did a really good job last year for us in the NASCAR K&N Pro Series East, finishing third in the championship points," said his K&N Series team owner, Shigeaki Hattori. "I wanted to give Brett the opportunity to race in the Truck Series and showcase his talent."


The No. 13 Toyota has been driven in the season's first seven races by Todd Bodine, who has the truck 17th in the current NCWTS owners' standings, making Moffitt is a guaranteed starter at Kentucky.
"I'm very grateful for this opportunity I've been given with ThorSport and HRE to drive the No. 13 AISIN Toyota Tundra this week at Kentucky Speedway," Moffitt said. "A mile-and-a-half track will be a new experience for me but I can't wait to get behind the wheel and start learning."
Posted by Dave Moody at 1:59 PM