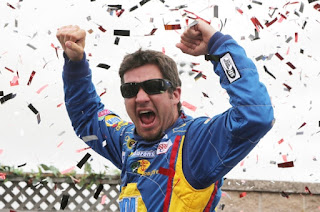 The last time Martin Truex, Jr., won a NASCAR Sprint Cup Series race, George W. Bush was in his final term as President of the United States. “Rags to Riches” became the first filly to win the Belmont Stakes in 102 years, Dr. Jack Kevorkian was released from prison after serving an eight-year sentence and Ali Hassan al-Majid -- known as "Chemical Ali" -- was sentenced to death for killing 180,000 Kurds at the direction Iraqi strongman Saddam Hussein. .


Sunday, 218 races after his last win at Dover International Speedway, Truex led three times for a total of 51 laps and drove away from challenger Matt Kenseth on the final restart en route to a dominant victory in the Toyota/Savemart 250 at Sonoma Raceway.


"I can't even put it into words," said Truex of ending his long victory drought. "Chad Johnston has come so far as a crew chief, he's just amazing. We've had cars that were really fast all year long, we've just had some tough luck. We've been close so many times – 200 and something races without a win – (that) it feels amazing to finally get one.”


It’s not like Truex has been out to lunch these last six years. He has finished second a half-dozen times in that span, coming agonizingly close to Victory Lane. Time and again, he and his NAPA Toyota team came up short, adding another maddening digit to that winless skein.


Sunday, however, there were no mistakes, no miscalculations, no mechanical failures and no late-race twists of fate. Nothing but a red-hot race car and a driver determined not to be denied again. In the decisive final laps, Truex drove away from one of the finest road racers on the planet in Juan Pablo Montoya, opening a comfortable, multi-second lead that was not about to be challenged.


When Montoya sputtered out of fuel on the final lap, Truex’s victory was guaranteed. And after becoming the seventh consecutive first-time Sonoma race winner and ninth different victor there in as many races, the normally soft-spoken Truex was overcome with emotion.


“I tried to cue the radio once and I couldn’t even talk,” said Truex afterward. “I was a mess, it was terrible. I had to stop doing doughnuts because I couldn’t think about what I was doing.
“I calmed down a little bit and made sure I took my time coming back, because at Dover it all happened way too fast. You never know when you’re going to get that opportunity again.”
Sunday’s win boosted Truex back into the Top-10 in championship points, the latest surge in his rollercoaster pursuit of a spot in the 2013 Chase for the NASCAR Sprint Cup. A 24th-place showing in the season opener at Daytona combined with a 36th the following week in Phoenix to put the NAPA Toyota team into a deep early hole. They didn’t crack the Top-10 in the championship standings until Charlotte in May, and recent rough outings at Dover and Pocono wiped out that progress, dropping them once again to 17th in the standings.
Now, Truex hopes he has turned the tide for good, allowing him and his Michael Waltrip Racing team to string together enough top finishes to make the Chase and contend for the title.
“We have had some very, very tough breaks,” insisted Truex Sunday. “We could have won three or four races in the past year and a half, if things had played out differently. Days when you do everything right and still don’t win, it’s really frustrating. But that’s the way it goes.
“Today, it played out in our favor, and I was glad it finally happened.
“Today was our day (and) we're going to get a bunch of them now. I can tell you that."
Posted by Dave Moody at 11:24 AM