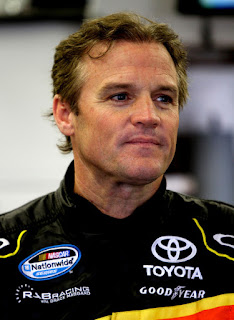 Kenny Wallace will return to Iowa Speedway this summer, at the wheel of a U.S. Cellular-sponsored NASCAR Nationwide Series Toyota in Saturday’s DuPont Pioneer 250 and the August 3 U.S. Cellular 250.


“In an effort to show our continued support for the U.S. Cellular 250, we decided to steer our involvement with Kenny to the race track,” said Kathy Hust, Mid-Central Region Vice President for U.S. Cellular. “We look forward to seeing his No. 29 car with U.S. Cellular logos zoom around Iowa Speedway’s track.”
During his 23-year Nationwide Series career, Wallace is a nine-time winner and three-time most popular driver. He has made the most starts in Nationwide Series history, and finished seventh and sixth in his last two Iowa Speedway appearances in 2011.
Wallace did not race during last year’s U.S. Cellular 250, due to lack of sponsorship. Backing from U.S. Cellular will help the 49-year old St. Louis native inch toward a milestone.
“I really want to get nine races in this year, because that would give me 900 NASCAR starts. That’s my major goal,” Wallace said. “I am excited. I really appreciate U.S. Cellular’s sponsorship during these two Iowa Speedway races. I also look forward to meeting more race fans when I am in Iowa this summer.”
This week, Wallace will sign autographs at Iowa Speedway in the U.S. Cellular Loyalty Lounge from 1 to 2 p.m. Friday and 2 to 3 p.m. Saturday.
U.S. Cellular will kick off summer in Iowa with a free event July 31 hosted by Wallace that will be open to the public. U.S. Cellular also will give consumers a VIP experience during the U.S. Cellular 250 and Iowa State Fair with exciting surprises. The company will release additional details on the July 31 event in the coming weeks.
Posted by Dave Moody at 11:57 AM