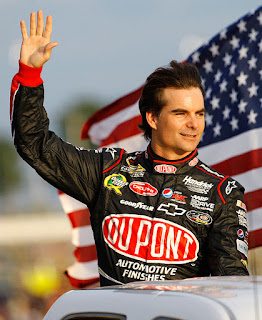 As a four-time NASCAR Sprint Cup Series champion, Jeff Gordon has little trouble getting the ear of NASCAR.


And after a runner-up finish behind winner Martin Truex, Jr. Sunday at Sonoma Raceway, Gordon had a couple of suggestions for the sanctioning body on possible modifications to its Sprint Cup Series road course rules.


"We don't have the body in the right position for the road courses to turn right,” said Gordon. “When we go to Watkins Glen, as fast as those right handers are, we're going to have some issues. There's nothing to lean on. You have plenty of grip on the left (turns), because the body still has a little bit of rake… nice side force on the right side of the car for those left turns. But on the right turns, the cars are just so out of control.


“Other than that, I love the Gen-6 car everywhere we go,” he said. “It's got good grip and drives well and looks great. I think other than those fast right handers, it was the same here (at Sonoma) today."
Posted by Dave Moody at 4:40 PM