Bodine To Texas With New Crew Chief And Crew 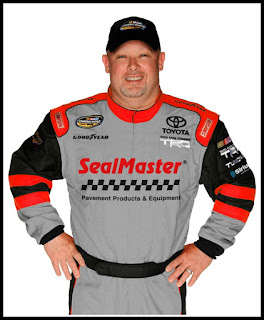 Todd Bodine has a significant winning legacy at Texas Motor Speedway, but enters this weekend's WinStar World Casino 400 with an all-new pit crew on his Sealmaster-sponsored ThorSport Racing No. 13 Toyota.


Bodine has a series-best six career victories at the high-speed 1.5-mile quad-oval,  and will also work with a new spotter at Texas, 2005 NASCAR Camping World Truck Series champion Ted Musgrave.
"Drivers make the best spotters and I know Teddy knows what he's doing," said Bodine. "I've never had the chance for him to spot for me, but he spotted quite a bit for Ron Hornaday last year and he was good at it."
Bodine's spent the first six races of the season working with ThorSport crew chief Jeriod Prince and his crew, which has also been responsible for fielding Frank Kimmel's ARCA Racing Series presented by Menards championship-leading No. 44 Ansell/Menards Toyota.
With ARCA practicing and qualifying on Friday in preparation for Saturday's Pocono ARCA 200, Prince and his crew will be unable to attend to Bodine’s Truck Series entry in Texas. They assembled and set up Bodine's truck before it left the ThorSport shop for Texas, and will hand off race-weekend responsibility to Jason Miller, former crew chief at Bobby Hamilton Racing who more recently worked as a crew chief for the VIVA Motorsports NASCAR Nationwide Series team, VIVA is not competing this weekend, and Miller has assembled a group of team members to work with his this weekend.
"Jason and I haven't had a chance to work together on a truck," Bodine said. "But I've been around Jason at the track, driven his cars a little bit and gotten to know him really well. We think a lot alike and he's a really good guy, so I think we'll be just fine.
"This is something we both wanted, to be able to work together like this and now we're getting the chance. And I think Texas is the perfect place to do it."
Bodine hopes that puts him in a position to add to his Texas spoils. Bodine is one of four former winners that are entered this weekend and while Bodine's won the most Texas Truck Series races, two other drivers have authored significant winning streaks.
Bodine's ThorSport teammate Johnny Sauter won both 2012 Truck Series races, while Bodine's former Germain Racing teammate Brendan Gaughan won four consecutive Texas Truck races, from June 2002 to November 2003 while racing for his family-operated team. Three-time Texas winner Hornaday Jr. is the other former winner in the 33-truck field.
"Sometimes you get lucky and sometimes you have good trucks and I've been blessed to have both -- six times at Texas," Bodine said. "Sometimes you hit a track you just like, and Texas is that way for me. I substituted for Ricky Craven in the first Texas Cup race and almost won that. I've just always enjoyed that track."
Bodine's numbers reflect that. Four of his six wins have come in the June race, in 2006-2007, 2009 and 2010 while his first two, in 2004-2005, were in November. Bodine registered six consecutive Texas top-five finishes from 2008-2010, when he was driving for Germain Racing. In 17 Texas starts Bodine has 10 top-five and 11 top-10 finishes.
But in his last four starts, Bodine has only an eighth-place finish last fall to show. So he hopes the new ThorSport combination gets him back on familiar ground in Texas.
"In a truck at Texas you pretty much run wide open and it's all about keeping the truck free and making it drive good," Bodine said. "And I've just always had good trucks to drive at Texas. When they drive really well, it makes it easier to go fast.
"You're walking a very fine line at Texas because you want to run wide open in race trim and you've got to have it good and free so it'll roll the corner fast and not get bogged-down. So the fine line comes from having it too free and the truck tries to spin out or not free enough and it's tight and doesn't want to turn in the corners -- that's where the big difference is."
Posted by Dave Moody at 2:27 PM