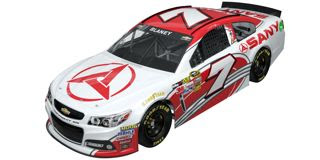 Tommy Baldwin Racing made the latest in a series of sponsorships announcements today, introducing SANY America as a major sponsorship partner for 2013.


With Dave Blaney at the wheel, SANY America will serve as the primary sponsor on the No. 7 Chevrolet SS for 14 Sprint Cup Series events and associate partner for 22 races, starting with the Subway Fresh Fit 500 at Phoenix International Raceway on March 3rd. The relationship was forged with the help of Al Heinke, owner of Mohawk Construction and co-owner of TBR.
Started in 1989 by college roommates, SANY is now the sixth largest industrial equipment company in the world. With global sales of their cranes, concrete pump machinery, excavators, and other heavy-duty equipment, they reported revenues of over $12 billion US in 2012.
SANY America opened its doors in Peachtree City, Georgia in 2007 as a division of SANY. All of the units they sell in the United States are designed specifically for the US market, using well known globally produced components, and are backed by an above-industry-standard two-year/4,000 hour warranty. Since opening in the U.S. two years ago, SANY America has sold over 150 cranes to customers across the country through selected dealers.
Team owner, Tommy Baldwin, Jr. is excited about opportunities that lie ahead for both companies. "As an organization, we're proud to have brought a new company into NASCAR. Both TBR and SANY America are achieving a milestone together. We're looking forward to being able to show them great benefits that a NASCAR sponsorship can offer."
"We're excited to start this venture with Tommy Baldwin Racing and NASCAR," said Kyle Nape, vice president of global sales and marketing at SANY America. "Many of our customers are NASCAR fans, so this partnership is a great way for us to get our name out there. We're looking forward to a great season with a great team."
Posted by Dave Moody at 5:01 PM