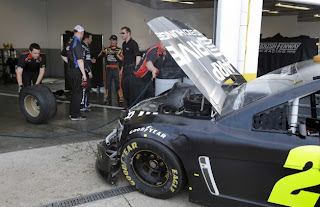 Jeff Gordon left Daytona International Speedway with a severely damaged AARP Drive To End Hunger Chevrolet, after being swept-up in a multi-car crash during the second day of Preseason Thunder Testing. While his car was much the worse for wear, Gordon spoke optimistically about NASCAR’s new Gen-6 race car


“I don’t know what started (the wreck),” said Gordon. “I know we were in a pack drafting, just trying to learn the cars and what this aero package is doing. Some guys started forming a line on the inside and things started getting a little more aggressive at that point. Somebody must have turned or got turned or something and then they just all started stacking up.”
The former series champion admitted he was “not surprised at all” by the crash, saying, “we see it every year. Maybe not quite this big, but you get down here in packs. It’s important to be in those packs and learn what you can learn, especially with a new car.
“I think you can kind of weigh into both sides of it,” said Gordon. “You know when the cars are starting to push and move around a lot more that the chances are getting higher that something is going to happen. I saw some things happen a couple of laps before that. You just ride it out and hope you can make it through it. Unfortunately, we didn’t in this case.”
Looking over a dozen damaged machines, Gordon nonetheless said he expects NASCAR’s new rule package tp produce competitive racing.
“The cars drive pretty well,” he said. “You can’t push, which I think is a good thing. You can get to the guy’s bumper, but the cars don’t line up very well. You really shouldn’t even be doing it. Unfortunately, that is the last little bit of momentum you need to make a pass, or make your lane move. So it’s something that is going to have to be dealt with very carefully.
“You are going to have to be cautious when you do it, and do it with the right guys,” he said. “But most of the time, you’re going to need to stay away from it. The cars really get good momentum by themselves, but they run side-by-side for a long time so it’s not easy to complete the pass.”
The Hendrick Motorsports driver called NASCAR’s new rules combo “a great package. I love it. We have gotten so comfortable with (pushing) on one another’s bumpers that we have to kind of start over again. We have to reset a little bit and go back to the way we used to do it, where you get close… gain momentum and push guys with the air, not the bumpers.”
Posted by Dave Moody at 8:42 PM