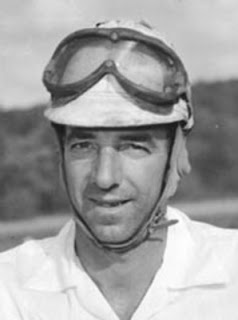 Take it from the King, Richard Petty. Herb Thomas stood tall in an era when the “stock” in stock car really meant something.

“He was as good as they come,” said Petty. “There have been very few guys who had more confidence in what he could do than Herb. He was so strong-minded that he ‘willed’ his wins and what he was doing on the track.


“He was going to beat the guys on the track no matter what was going on. That was his mind set.”
That’s high praise indeed from a driver whose father, Lee, battled door to door with Thomas and traded NASCAR championships with him. Both Pettys, Lee and Richard, are already members of the NASCAR Hall of Fame. Thomas will be inducted on Friday, Feb. 8, along with fellow NASCAR premier series champions Buck Baker and Rusty Wallace; championship owner Cotton Owens and innovative crew chief, mechanic and engine builder Leonard Wood.
Thomas was born into a farming family in Olivia, N.C. not far from where North Carolina Motor Speedway (now Rockingham) would eventually be built. He was NASCAR’s first two-time champion, capturing premier series titles in 1951 and 1953 and finishing second in two other seasons including 1954, Lee Petty’s first of three championship years.
Thomas, who died in 2000 at the age of 77, won 48 races between 1951 and 1956 – establishing a record winning percentage of 21.05 percent over his 228-race career. He ranks 13th all-time in NASCAR premier series wins, and won three of the first six Southern 500s at Darlington Raceway.
“It’s win or bust,” Thomas once said. “Second place is never good enough.”
Thomas caught the racing bug in 1947 when he attended a modified race in Greensboro, N.C., with a group of friends. He bought one shortly thereafter, but never had much success with the car. Thomas’ son, Victor Herbert Thomas, guessed that his father honed his driving skills behind the wheel of a dump truck hauling dirt over winding back roads to Ft. Bragg, N.C., during World War II.

“Daddy came from farming; he never was associated with the moonshine bunch,” he said of his father, who also cut timber and operated a saw mill.
Although he eventually won races in a variety of cars, Thomas will forever be remembered as the driver of the No. 92 Fabulous Hudson Hornet, powered by Smokey Yunick engines built by owner of the self-proclaimed “Best Damn Garage” in Daytona Beach, Fla.
Thomas, who had won races earlier in the season driving a Plymouth and an Oldsmobile, switched to the factory-supported Hudson Motor Car Co. effort in mid-1951. The Hornet featured a high-torque inline six cylinder engine and – according to Thomas – a low center of gravity that gave the car a decided edge in performance.
The biggest advantage, however, was Thomas himself.
“The tracks were rough, dusty and weren’t hard-packed,” recalled Hershel McGriff, who competed against Thomas in 1954 and won five races driving an Oldsmobile for car owner Frank Christian.  “You had to learn to drive around the holes. Herb was real competitive.” 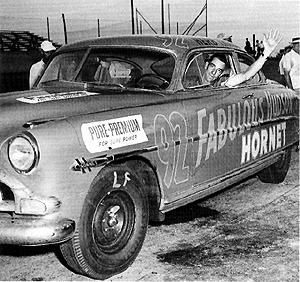 Thomas won seven times in 1951 – five of those victories in the Hudson – and won the championship by a comfortable margin over Fonty Flock to become NASCAR’s first driver/owner titleholder. He posted eight wins a year later, but finished second to Tim Flock, who also drove a Hudson.
Thomas won 12 times in both 1953 and 1954, as he and Lee Petty swapped championships. By 1955 Hudson withdrew its factory support from NASCAR, forcing Thomas to campaign Chevrolets and Buicks. He crashed in May’s race at the three-quarter mile Charlotte Speedway dirt track, suffering injuries that sidelined him through most of the summer. He returned to win the Southern 500 for the third time, and finished fifth in points despite missing 19 races.
The 1956 season was Thomas’ last as a full-time competitor. He won five times, including three consecutive victories in Portland, Ore., Eureka, Calif. and Merced, Calif. at the wheel of Carl Kiekhaefer’s No. 300B Chrysler 300. His crew chief was current NASCAR Hall of Fame nominee Ray Fox.
Thomas raced three more times in 1957 and 1962 before retiring for good. "I used to pass everyone in the turns,” he said. “Now, they pass me in the turns. It's time to hang it up. There’s no use running if you can’t be first.”
Thomas’ son, Victor, recalls his father as a quiet man, never one to brag about his accomplishments.
“He always respected others and wasn’t a talker, but if he said something, it would be the truth,” he said. “He never thought of himself as being a NASCAR champion. He was just a regular guy; a humble man.”
Induction ceremonies will take place at 7:30 p.m. ET in the Crown Ball Room at the Charlotte Convention Center which is directly connected to the NASCAR Hall of Fame. The event is the first half of NASCAR Acceleration Weekend followed on Saturday, Feb. 9 by NASCAR Preview 2013. Tickets for the ceremonies start at $45 (available at www.nascaracceleration.com) and the NASCAR Hall of Fame box office. In addition, a $20 ticket will gain fans all-day access into NASCAR Preview 2013 and the NASCAR Hall of Fame on Saturday, Feb. 9.
Posted by Dave Moody at 5:26 PM