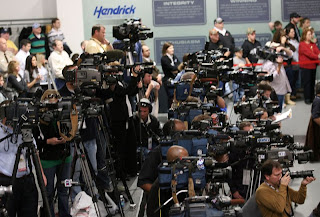 
“This four-day event provides more than 100 media outlets with newsworthy content to get fans revved-up for the upcoming season,” said Marcus Smith, president and general manager of Charlotte Motor Speedway. “It takes a lot of cooperation and support from Sprint, the race teams and NASCAR to make it possible, and I’m just as excited as our fans to hear what the drivers and owners have to say about 2013.”
This year, credentialed participants from across the United States, as well as Brazil, Germany and the Netherlands, will preview the 2013 racing season. The Associated Press, ESPN, Fox Sports, Reuters Newswire, The New York Times, Sports Illustrated and USA Today are among the major media outlets to be represented on the tour.
More than 20 stops will keep participating media occupied throughout the week including visits to Joe Gibbs Racing, Hendrick Motorsports, Penske Racing, Richard Childress Racing and the NASCAR Hall of Fame. Earnhardt Ganassi Racing, Michael Waltrip Racing, Stewart-Haas Racing and Roush Fenway Racing are among the many teams that will also be hosting programs. Sure to be a major topic is the introduction of the new sixth generation NASCAR Sprint Cup Series car.
Daily updates, including video and photo galleries will be available on Charlotte Motor Speedway’s website, www.charlottemotorspeedway.com, on Facebook at www.facebook.com/CharlotteMotorSpeedway and via Twitter at twitter.com/cltmotorspdwy or by following the Twitter hashtag #SprintMediaTour.
For information on the NASCAR Sprint Media Tour hosted by Charlotte Motor Speedway, contact the speedway’s communications department at (704) 455-3209.
Posted by Dave Moody at 12:54 PM