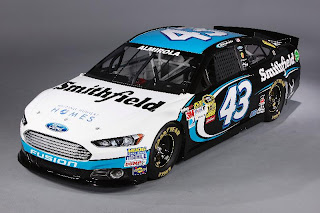 Smithfield Foods announced today that it will expand its partnership with Richard Petty Motorsports to include primary sponsor of the legendary No. 43 Ford in 25 events during the 2013 NASCAR Sprint Cup Series season.

Smithfield Foods and its family of brands including Eckrich, Farmland, Gwaltney and Smithfield will all participate as primary sponsors throughout the year. Aric Almirola will drive the Smithfield Foods-backed No. 43 Ford in his second full-time season in the NASCAR Sprint Cup Series.

Smithfield Foods, the world's largest producer of pork products, will continue to engage fans with unique marketing initiatives that introduce NASCAR fans to the company's many brands and products. Both rich with history, Smithfield Foods and Richard Petty Motorsports are a natural match while both pursue continued excellence in their respective industries.

"We are thrilled to come back as a partner of Richard Petty Motorsports, Aric and the No. 43 team this season," said Joe Luter IV, Executive Vice President of Smithfield. "We were very pleased with the value that the partnership provided us and our customers in our first year together. We are already working hard to make our race program better this year."

"We are happy to continue our partnership with Smithfield and its family of brands," said Richard Petty, co-owner of Richard Petty Motorsports. "The folks at Smithfield put some great programs into place last season, and we can't wait to see what they have in store this year. Smithfield came on board at a pivotal time for our company and helped us develop to the team we are today. Aric and Todd came on strong at the end of the year last year, and we're looking forward to a solid year in 2013."

Almirola not only became a partner of Smithfield last season, but also became part of its marketing programs, playing a key role in giving back.


"I had a great time working with Smithfield and its companies last season," Almirola commented. "Together, we gave back to the community through Smithfield's initiative Helping Hungry Homes, Eckrich's Operation Homefront and to Harvesters Food Bank with Farmland Foods among others. It has been a privilege to work with a company that focuses on giving back. Not to mention, their quality products."
Smithfield Packing will kick off the season aboard the famous No. 43 Ford at Daytona International Speedway for The Sprint Unlimited on February 16 and the 55th running of the Daytona 500 on February 24.
Posted by Dave Moody at 10:42 AM