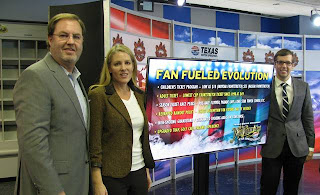 
The sweeping changes - known as the Fan-Fueled Evolution - come as a result of recommendations from the Texas Motor Speedway Fan Council and extensive fan surveys of former season and individual ticketholders. The speedway executive team, led by Gossage, examined and evaluated all of the recommendations and survey results to construct an all-encompassing package to further enrich the fan experience while making it even more economical to visit the largest sports facility in Texas during its three major race weeks.
"These fan-fueled changes are 12 things we're doing to change the sport," Gossage said. "Sports teams, both locally and nationally, have been announcing ticket price increases, but we have come up with a dozen dynamic changes for our fans. From price cuts to children's ticket pricing to a new rainout policy to race friendly hotel listings on our website and more will make attending our races easier and more fun. We are committed to over delivering to our fans once again."
Gossage was joined by Texas Motor Speedway Fan Council members Brenda Baxter and Robert Rich for the announcement. The two council members are part of a 22-member group that meets with speedway officials during race weekends and the offseason to address a variety of aspects related to the speedway and its racing activities.

"I've been regularly going to races at TMS for three years, and not once have I ever felt like they were resting on their laurels and not thinking about how to improve," Rich said. "The Fan Council is an extension of that mindset. This isn't a marketing ploy or a half-cocked plan, they're serious. Eddie Gossage was at every in-person meeting and on the phone, asking pointed questions, begging for criticism, and giving honest insight into the thought process behind everything he does. Nothing was off-limits for discussion. I truly felt like I could say anything and it would be not only heard, but acted upon.
"I think these changes could put us back in the days of complete sellouts at the track, and that's great for motorsports. TMS is the premier race facility in the South, and the Fan Council allowed me and the rest of the group to truly have our voices heard and ensure that the facility doesn't just look great, but functions great as well in every aspect."
The majority of the changes will go into effect immediately while others will be in place when Texas Motor Speedway opens its 2013 season with the Texas 500 NASCAR doubleheader weekend on April 11-13. The changes and enhancements that will go into effect consist of:
·         New Children's Ticket Program. While many sports entities limit reduced pricing on children's tickets to specific, lesser expensive sections, Texas Motor Speedway will have the pricing available in all sections and available to both individual and season ticket holders. Children's pricing (12 and under) will begin as low as $10 on the backstretch and $25 on the frontstretch in designated sections for NASCAR Sprint Cup Series races, but a reduced pricing structure also will be in effect for all sections and all series competing at the speedway. Children's pricing in designated sections also will start as low as $10 on the frontstretch for the IZOD IndyCar Series, NASCAR Nationwide Series and Camping World Truck Series races. Those who already have purchased tickets at full price for children will have the option on a refund for the difference or credit for future purchases. To take advantage of this new program, please contact the Texas Motor Speedway ticket office at (817) 215-8500.


·         Adult Individual Ticket Restructuring. The ticket pricing model for the frontstretch has been restructured to provide more price points for fans, including sections that will be lower than previous years. An individual ticket for the NASCAR Sprint Cup Series races in April (Texas 500) and November (AAA Texas 500) will start as low as $49 on the frontstretch. This will be the lowest-priced individual frontstretch ticket (outside of special promotions) ever offered for a Sprint Cup Series race at Texas Motor Speedway since 1998. Individual tickets will start as low as $35 for the IZOD IndyCar Series and $25 for the NASCAR Nationwide and Camping World Truck Series races. Those who already have purchased tickets at a previous, higher price will have the option of a refund for the difference or credit for future purchases by contacting the Texas Motor Speedway ticket office.


·        Unique Race-Related Perks For Season Ticketholders. Beginning in February, Texas Motor Speedway will roll out a 38-week program in which current season ticketholders will be randomly chosen to receive a unique enhancement to their race week experience. The perks include riding in the aircraft that will perform the pre-race flyover for the Sprint Cup Series race in April; riding with NASCAR and INDYCAR drivers during pre-race parade laps; free use of a Lone Star Tower condominium for the Firestone 550 IZOD IndyCar Series weekend; special passes to the Sprint Cup Series drivers' meeting; and many more.


·        Revamped Rainout Policy. If a season or individual ticketholder is unable to attend a rained-out race on its rescheduled date, they will have the ability to redeem that ticket for a future event at equal or lesser value for up to one calendar year. Tickets under the previous policy were only valid for the rescheduled date.


·        Non-Smoking Grandstands. As a result of overriding sentiment in the surveys and Fan Council meetings, Texas Motor Speedway will no longer permit smoking in the grandstands. This move follows in step with all the local major sports venues and the majority throughout the country. While this move will serve as a benefit to many, Texas Motor Speedway also will be responsive to its fans that smoke and set up designated smoking areas throughout the lower concourse area.


·        Upgraded Fan Tram Service, Golf Cart Assistance And Parking Experience. Texas Motor Speedway is compiling a detailed plan for its fan tram service and golf cart assistance program, including designated pick-up and drop-off areas, to ensure optimum service throughout race days. Regarding parking, the speedway will offer fans additional free paved parking near the gates and better educate its parking attendants in the interest of the fans.
·         Upgraded Backstretch Seating Experience. Ticketholders will now have the benefit of a 17x27-foot Jumbotron screen in the center of the backstretch as well as an upgraded sound system to enjoy the NASCAR race weekends (Note: The backstretch is closed for the INDYCAR race weekend).


·        Flexible Season, Individual Ticket Payment Plans. Texas Motor Speedway's ticket office will work with both season and individual ticket purchasers on a layaway plan that works best for their budget.


·        "Code Of Conduct" Text Response System. Texas Motor Speedway will incorporate a texting system where fans can alert speedway officials of conduct unbecoming during a race week and allow them to address the issue immediately.


·        Fan Friendly Hotel Listing. In addition to its preferred hotels, Texas Motor Speedway will produce a list of hotels on its website that does not require a minimum stay and a maximum price hike of 10 percent or less during race weeks. The list will have pertinent hotel information and links to their websites.


·        New Reactive Website, Mobile Lite Site. Texas Motor Speedway will unveil a new, dynamic and more fan friendly website on Feb. 18 as well as new mobile lite site. The reactive design will allow the site to read what platform one is using to access the web and adjusts content delivery accordingly. The mobile lite site possesses a different wireframe and requires very low bandwidth, which is extremely beneficial during race weeks.


Tickets, including season ticket packages beginning as low as $270, are available by calling the Texas Motor Speedway ticket office at (817) 215-8500 or by visitingwww.texasmotorspeedway.com.
Posted by Dave Moody at 2:22 PM