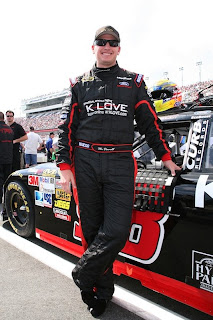 Michael McDowell announced today that he will return as driver of the No. 98 Ford Fusion to run the full 2013 NASCAR Sprint Cup Series schedule. McDowell's Ford will be fielded by Phil Parsons Racing with Roush Yates Engines supplying the power. Gene Nead will continue to call the shots for the team as crew chief.


Sponsorship plans to cover McDowell's car are being pieced together. Positive, Encouraging K-LOVE radio will be back to sponsor the No. 98 Fusion at Daytona and potentially more races later in the schedule. Curb Records is returning as an associate sponsor for the season and will serve as primary sponsor at a to-be-announced event. The team is currently pursuing partners to fill the rest of the Sprint Cup Series schedule.
"Everything is coming together for us to have a great season," McDowell said. "We have new cars, new bodies and lots of potential. Our team has really hustled over the off season to get us prepared for 2013. They've put together some awesome cars, and with Roush Yates horsepower under the hood, I know we can run with some of the best teams in the sport. I have a lot to look forward to this year and can't wait for the green flag in Daytona."
"I've never been more excited about the beginning of a season," team owner Phil Parsons said. "We have some great relationships that are continuing, as well as some new ones, which have us very optimistic about 2013. I want to thank K-LOVE, Curb Records, Hyde Park Storage Suites and Ford for all of their support. Their partnerships have allowed us to grow and develop as a team, and we look forward to a great year with them."
This year marks McDowell's fifth year competing in the Sprint Cup Series. He ran in 30 of the 36 events last season, achieving a best finish of 23rd place, which came at Bristol Motor Speedway in August. McDowell competed in six Nationwide Series events last year, earning five top-10s and two top-fives, and one pole.
Posted by Dave Moody at 4:42 PM