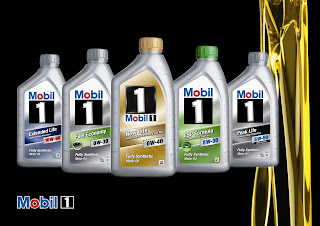 NASCAR and ExxonMobil have announced a multi-year partnership extension, making Mobil 1 synthetic motor oil the ‘Official Motor Oil of NASCAR’ through 2017. The 2013 NASCAR season will mark the 11th consecutive season in which the Mobil 1 brand is an official partner of NASCAR, the premier motorsports series in the United States.


As part of the renewed relationship, Mobil 1 will continue to be a contingency partner across all NASCAR national and touring series, the presenting sponsor of the Mobil 1 Driver of the Race Award and the presenting sponsor of the NASCAR Canadian Tire Series. Mobil 1 motor oil is used by more than half of teams competing in NASCAR’s three national series. The durability and high performance of Mobil 1 synthetic motor oil have been continuously proven by enduring rigorous racing conditions on a weekly basis.
“We are pleased to welcome back Mobil 1 to our family of Official NASCAR Partners," said Jim O'Connell, NASCAR chief sales officer. "Mobil 1 utilizes its official motor oil status as a critical and powerful part of the brand's marketing mix and we believe that the Official Motor Oil Status will continue to help move product off the shelf.”
According to Mobil 1 research, NASCAR fans are nearly twice as likely to prefer, try and recommend the brand because it is the ‘Official Motor Oil of NASCAR.’ Fans of NASCAR are approximately 40 percent more likely than non-fans to add or change motor oil themselves or have other household members do so (source:Ipsos, NASCAR Brand Tracker - 2011).
“As the lubricant technology of champion drivers and race teams, the renewed association between Mobil 1 and NASCAR allows us to better engage motorsports fans by leveraging the excitement of racing,” said Rebecca K. Aldred, Global Brand Manager, Mobil 1. “Additionally, the launch ofthe ’NASCAR Automotive Technology Center Engineered by Mobil 1’ demonstrates our commitment to cutting-edge technology, both on and off the track.Today, Mobil 1 is the world’s leading synthetic motor oil brand in no small part due to the commitment to supporting NASCAR’s three national racing series.”
Expanding the partnership into the digital space, ExxonMobil and NASCAR will launch a new branded content environment that explores NASCAR’s world-class automotive technology via the ”NASCAR Automotive Technology Center Engineered by Mobil 1” online experience housed on the newly launched NASCAR.com. The comprehensive platform will deliver automotive technology-driven content through original feature stories, imagery, rich video content, fan polls and a glossary of specialized automotive and racing terms. The new platform will be unveiled at NASCAR.com in the coming weeks.
This partnership renewal complements ExxonMobil’s lubricant technology relationship with Stewart-Haas Racing and Tony Stewart’s No. 14 Mobil 1 / Bass Pro Shops Chevrolet Impala in the NASCAR Sprint Cup Series.
Posted by Dave Moody at 10:42 AM