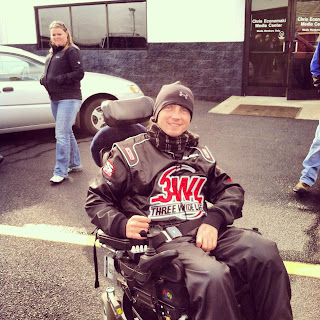 The word “can’t” simply does not apply to Shane Hmiel.

The former NASCAR Nationwide Series driver returned to the cockpit of a race car Saturday at Rockingham Speedway, for the first time since a devastating USAC Sprint Car crash at the Terre Haute (IN) Action Track on Oct. 9, 2010, left him a quadriplegic.


Doctors initially told Hmiel’s family that he had only a 10-percent chance of survival. He was never expected to walk or breathe again on his own, and was not supposed to move his fingers, arms, toes or feet. The former driver has defied all those predictions, however, regaining some function in all his extremities. Saturday, he proved the naysayers wrong again, guiding a Ford Taurus stock car around the legendary Rockingham Speedway 1.017-mile oval.
The outing was organized by Accessible Racing co-founder Brian Hanaford, who suffered a traumatic brain injury as a youth and has devoted much of his life to providing opportunities for brain-injured and paralyzed individuals to sample a piece of so-called “normal life.” Hanaford modified the former ARCA Series racer, making it handicapped accessible and adding zero-resistance electronic throttle and brake controls.
“The driver’s seat is mounted on a rack that tilts out to the side and through the open door,” explained Hmiel. “Two people lifted me up -- one underneath my arms and the other under my legs – and set me in the seat, just like they do my wheelchair. They tilted the seat back where it needs to be for me to drive, then crossed my right leg underneath my left leg to keep them from flopping around in the corners. The hand controls were just like the ones I use when I drive the (therapy) van in Atlanta. My left hand ran the gas and brake -- forward was gas, back was brake – and I steered with my right hand.”
The car is also equipped with a complete set of passenger-side controls for an “assistant driver,” who can take control at any time, if needed.


“(Former NASCAR Busch North Series champion) Dave Dion was my assistant driver, and he said, `Shane, you do whatever you’re comfortable doing.’ I’m sure he felt like taking over a couple of times, but he never did. 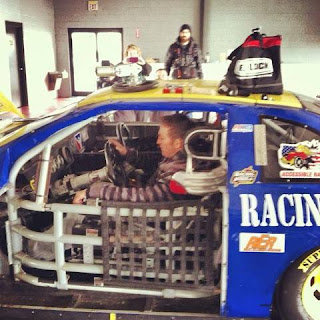 “I was more nervous than I thought I’d be,” admitted Hmiel. “I went into it thinking, `whatever happens, happens,’ but the more I thought about it, the more nervous I got. There were a couple of other guys there (to drive the car), and I sure didn’t want to be the slowest. I didn’t want to look like an idiot (by going slow), but I didn’t want to tear the car up, either.
“Once I got going, it was fine,” he said. “The car was really comfortable and it drove really well. We ran a 38-second lap, which works out to more than 100 mph. Not bad for a quadriplegic!”
Two injured Marines -- Scout Sniper Jesse Fletcher and Lance Corporal Cody Evans – also toured the Rockingham oval Saturday. Both lost their legs to exploding IEDs in Afghanistan, and while neither had a motorsports background prior to Saturday, both emerged from the cockpit with smiles a mile wide.
“It was totally new to them,” said Hmiel. “They never even thought about racing before last weekend, but when this opportunity came up, they jumped at it. That’s what excites me about this whole deal. It proves that even after you’re injured, you can still do things you’ve never done before. When they climbed out of that car, their smiles were almost as big as mine.
“Racing4Vets and Accessible Racing are great organizations,” said Hmiel afterward. “I hope these deals can grow, so we can give more handicapped people rides, all around the country.
“It’s progress, not perfection,” said Hmiel, repeating a mantra he credits with getting him through the toughest times of his life. “Since the day I got hurt, I haven’t once thought realistically that I would get back behind the wheel of a race car. It was a dream, but it wasn’t something I ever thought could be real.
“We need to get injured veterans and paralyzed people in race cars,” he said. “We need to get them into white water rafts. We need to take them bungee jumping… all kinds of things they never thought they’d do.”
As Hmiel proved again Saturday, there’s no such thing as “can’t.”
Photos: Hmiel family
Posted by Dave Moody at 11:05 AM