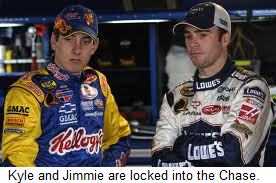 Just two races remain before the final, 12-driver Chase for the NASCAR Sprint Cup field is set. This weekend's "AdvoCare 500" at Atlanta Motor Speedway offers a number of drivers an opportunity to clinch their spot in the 20111 Chase; too many, in fact, to outline every one. However, there are some likely clinch scenarios worthy of notice.

Five drivers have already punched their ticket to NASCAR's postseason. Kyle Busch and five-time defending champion Jimmie Johnson are tied at the top of the current point standings, and have already locked-in a spot in the Chase. Roush Fenway Racing teammates Matt Kenseth and Carl Edwards also cannot fall out of the Top-10 before Chase time. Sunday's "Advocare 500" will further clarify the Chase picture, since any driver who leaves Atlanta with a 49-point margin over 11th place will automatically be locked into the Chase.

Drivers with opportunities to claim guaranteed Chase positions at AMS include:

Kevin Harvick -- Three regular season victories have already earned the Budweiser Chevrolet driver at least a Wildcard berth in the Chase. However, with a 93-point advantage over 11th place, he will likely cement a top-10 points position Sunday. All he needs is a finish of 40th, 41st with at least one lap led, or 42nd with the most laps led.

Jeff Gordon -- Like Harvick, the four-time series champion currently stands 93 points ahead of 11th place. His Top-10 clinch scenario is identical to Harvick's, needing only to finish 40th, 41st and at least one lap led, or 42nd with the most laps led. 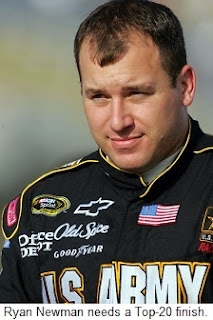 Ryan Newman -- The Rocketman is currently stands 73 points ahead of 11th place, and can guarantee a Top-10 points finish with a finish of 20th or better Sunday. He can also finish 21st with one lap led, or 22nd with the most laps led.

Kurt Busch -- Currently 60 points ahead of 11th place, the Shell-Pennzoil Dodge driver can lock-up a Top-10 points finish with a finish of seventh Sunday; an eighth-place finish with one lap led; or ninth with the most laps led.

Dale Earnhardt Jr. -- Earnhardt could clinch a Chase berth Sunday, but with only a 39-point edge over 11th place, he does not control his own fate. There is no specific finish that will guarantee the AMP/National Guard team a clinch, and they will likely need to go to Richmond next weekend to punch their playoff ticket.

Tony Stewart -- Stewart can clinch a Chase spot Sunday, but he can also fall out of the Top-10 if red-hot Brad Keselowski continues his torrid, late-season surge. Stewart's margin over 11th place Keselowski is just 21 points, and in order to clinch at Atlanta, he'll need Keselowski to have a bad day.

Brad Keselowski -- His three regular-season wins make him a virtual lock for a Wild Card berth, but the Miller Lite Dodge driver wants more. If he is able to unseat Stewart and claim the final spot in the Top-10, Keselowski will put himself in line for nine postseason bonus points; enough to send him to the Chase just three points out of the championship lead.