With Edwards Signed, Stenhouse and Bayne Uncertain Of 2012 Plans

Carl Edwards' recent decision to remain with Roush Fenway Racing for another three years answered all the questions concerning his immediate NASCAR future. For youngsters Trevor Bayne and Ricky Stenhouse, Jr., however, Edwards' decision threw everything into doubt. 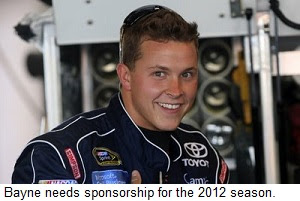 Both Bayne and Stenhouse have run full NASCAR Nationwide Series schedules this season with Roush Fenway Racing, with Bayne also moonlighting in a part-time slate of Sprint Cup events with Wood Brothers Racing. Both drivers were in line to succeed Edwards had he succumbed to temptation and absconded to Joe Gibbs Racing. Now, however, both are faced with an uncertain -- and at present, unsponsored -- future.

Bayne and Stenhouse remain under contract with RFR for 2012, but there are no guarantees that either will return for another full-time Nationwide championship bid. Stenhouse, the elder statesman of the pair at age 23, has already racked up a pair of Nationwide wins this season, including a thriller of a finish last weekend at Iowa Speedway that saw him explode an engine coming off the final turn and crash (with Edwards) across the finish line. But while he currently leads the championship standings by 12 points over Reed Sorenson -- an impressive showing for a driver who only a year ago appeared to be in danger of losing his ride -- he has run most weekends with little or no sponsorship on the quarter panels of his Ford Mustang. The same is true of the 20-year old Bayne, and without an influx of backing in 2012, two of NASCAR's most promising young stars could find themselves relegated to a part-time schedule of events, or sidelined altogether.

All is not lost for fans of NASCAR's hottest young drivers, however. Bayne will almost certainly return to the Wood Brothers Ford next season for a partial schedule of Sprint Cup Series events. Sources in the Sprint Cup garage say Stenhouse could run as many as seven Sprint cup races in a fifth Roush Fenway Ford next season, if the team finds sufficient sponsorship to exercise its option and field a part-time, fifth entry for the rookie driver. He could even become a full-time Cup driver next season if Richard Petty Motorsports elects to expand its Sprint Cup operation to three cars; an option that is also wholly dependent on sponsorship.

Asked about his 2012 plans, Stenhouse said, "Right now we have no idea. If Carl was leaving... it sounded like somebody was going to have to run the #99 (Sprint Cup Ford). But they never talked to me for sure about it." 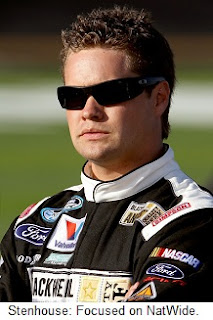 Stenhouse said his sole focus at present is the 2011 Nationwide Series championship; a title that would boost his stock as a driver and make him more marketable to potential sponsors. "We're focused on the championship," he said. "The ideal situation (would be) to run another full season in Nationwide and a part-time Cup deal. But I don't want to jump too early and get in over my head."

Like Stenhouse, Bayne steadfastly avoided talking about what might have been, had Edwards chosen to move on. "You're never disappointed to keep a good teammate that is going to help you, especially one you get along with really well," he said. "But when you have two developmental drivers running strong, sometimes you want to see a seat open up."

For now, both Bayne and Stenhouse will continue to make the most of their current situations, hoping they lead to more opportunities in 2012 and beyond.