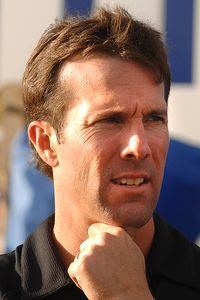 “If we can add a couple of Nationwide programs and a Truck program… I don’t think there’s a person here who will have to worry about their job,” he said. “That is one of the things that made this worth looking at. For a lot of our key guys who have been here for years, there will be roles in the shop or motor department that they can fill. A lot of them will still have their (previous) jobs, a few of them will probably go on the road with the teams, and some of them will have different roles that will allow us to do things better across the playing field.”

Gibbs said the proposed new Nationwide and Truck Series teams will run under the JGR banner. “We will continue to do all our (current) Nationwide teams, and if we add new teams, it will give us spots to put guys in so no one has to worry about their job.” He revealed that the new teams could be implemented quickly, saying, “Additional motor programs are one of the easiest things to do. The harder stuff is to build chassis, cars, parts and pieces and put them all together. The motors come (from TRD), you put them in, run them, take them out and send them back. (The new teams) are something we think we can add and do a good job with.”

Gibbs said plans for a fourth Sprint Cup team were not necessarily derailed when Carl Edwards opted to remain with Roush Fenway Racing, rather than jump to JGR. “In each of the last three years, we’ve looked around to see what kind of things pop-up that would allow us to make (a fourth team) work,” Gibbs said. “But it all has to come together. You have to have a driver, which is key. You needthe right partner to sponsor the team (and) you have to have the right crew. If all that comes together, we’re good to go. We can go quickly.

“But we’ve also learned that if all that doesn’t come together, we’re better off waiting, instead of trying to force something to go together. That’s where we are right now. We can go quiclyk if it all lines up, and that’s our hope.”

He admitted that a fourth Sprint Cup Series Toyota in 2012 is “probably a long shot, (since) we’re not lined up with the right partners. But I also wouldn’t rule it out. We don’t have to plan something out six months in advance. We can cut it a little closer and make it work. We’re in no hurry. There’s no panic and we’re not going to force it, but if the opportunity is there, we can take advantage of it quickly.”