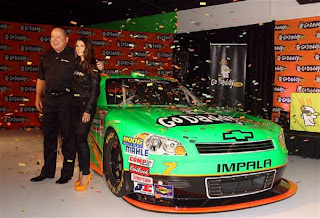 It’s official, Danica Patrick will be a full-time stock car racer in 2012.

Alongside GoDaddy.com CEO and founder Bob Parsons, Patrick ended months of speculation Thursday with an announcement that – while official at last – offered little or no detail beyond what was already widely known. She will run the entire Nationwide Series schedule next season for JR Motorsports, in addition to running 8-10 Sprint Cup Series races for Stewart-Haas Racing.

"The (NASCAR) experience was something I've really, really enjoyed," said Patrick today. “The time is now. The opportunity is now. Bob and GoDaddy have made that possible (and) I want to do it. I don't want to wait years. I want to do it now, and I'm lucky enough to have a sponsor that will stand behind me and allow me to go."

Patrick did not confirm reports that she will make her first career Sorint Cup Series start in next year’s season-opening Daytona 500, saying, "We're definitely considering that, but the schedule for the Sprint Cup races next year is not set. It'll probably be about 8-10 races, but the actual races themselves have not been chosen yet."

Stewart Haas Racing co-owner Tony Stewart said Patrick will likely spend only on season in nationwide before graduating to NASCAR’s senior circuit. “We're very excited to have Danica Patrick and Go Daddy join Stewart-Haas Racing for a limited NASCAR Sprint Cup Series schedule in 2012,” said Stewart, “with the intention of us running her full time in Sprint Cup in 2013.” 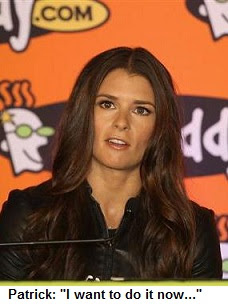 Patrick made her stock car debut in last year’s ARCA opener at Daytona International Speedway, then followed with a limited schedule of 13 Nationwide Series races. She appeared tentative and hesitant in that first season, and posted a disappointing best finish of 19th. As her confidence grew, however, her finishes have improved. This season, she has made seven Nationwide starts in the #7 JR Motorsports Chevrolet, with a best finish of fourth in the “Sam’s Town 300” at Las Vegas Motor Speedway in March. She also led the July race at Daytona with just four laps remaining, before being swept up in a crash not of her own doing en route to a 10th place finish.

NASCAR Chairman and CEO Brian France said he believes Patrick is ready for the rigors of a full-time NASCAR schedule, saying, "Danica has shown solid improvement in NASCAR and we believe her decision to run full time in the NASCAR Nationwide Series, with additional races in the NASCAR Sprint Cup Series, will be exciting for our fans and a great challenge for her.

"We are pleased (she) has chosen to race full time in NASCAR in 2012," said France. "She has demonstrated a strong desire to compete and NASCAR provides the best opportunity to race against the top drivers in the world with the largest and most loyal fan base in motorsports on a week-to-week basis.