It’s official, Jimmie Johnson and Kurt Busch will not be exchanging Christmas cards this year. 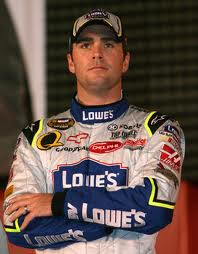 Johnson and Busch engaged in a heated verbal confrontation following last week’s event at Pocono Raceway; each blaming the other for contact on the final lap and lobbing caustic remarks at each other through the media. Nearly a week after Johnson labeled Busch a "crybaby" and "smart ass," the love-fest continued at Watkins Glen Friday, with Johnson uncharacteristically lambasting Busch during his weekly media availability.

“Bottom line, he just started running his mouth,” said Johnson. "When you're having words with someone and the crowd starts to build around you, and that guy all of a sudden starts to get brave, and you…walk away and the guy gets real tough... I don't know about you, but that makes me mad. The crowd started to build, and his bravery started to build. I walked away and he got tough. That's the part that frustrates me. If you're not going to say something to the man's face, don't wait until he walks away.

“Look over the years at what his mouth has done for him,” said Johnson. “It got my biggest fan, Jimmy Spencer, to punch him in the face (and) it's led to issues with the NASCAR officials on pit road. I think we all tune in weekly and wonder what he's going to say to his crew guys, (and) look what he said to Roger Penske, his car owner. At the end of the day, I'm not going to let him run his mouth at me. That's just kind of how it is.”

Told of Johnson’s comments, Busch returned fire the following day, insisting that neither he nor the five-time Sprint Cup champion did anything wrong on the final lap at Pocono. He called their contact, “what champions need to do. We raced each other with a juke and jive and rubbing. That’s racing. I talked to my dad about it and (he said), `That’s racing, son. That’s how it works.’”

Johnson disagreed, saying, "I made zero contact with Kurt at Pocono. Once he hit me, I leaned on him back. When I went to break the draft, I never touched him. Then he instigated the contact.” 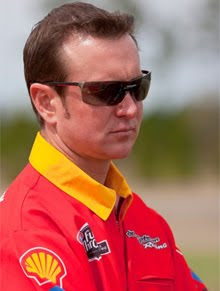 Busch said he understands Johnson's post-race anger, but does not agree with it. "He was real amped up, and he felt like I did him wrong," said Busch. "(But) the response from people this week (has been), 'That was exciting. That's what we want to see. That's the intensity and the passion our sport is built off of.' This is a bunch of guys racing stock cars in the southeast. This isn't open-wheel racing where we're supposed to pass each other clean and be out front and leading by 10 seconds."

Both drivers stressed that they can continue to race together, despite the ill-will that clearly exists between them. “My first option is not to tear up race cars," said Johnson. "I have too much respect for the guys working on my race cars and too much respect for Roger Penske and his organization to take it out there (on the track). Shooting each other the bird on the straightaway… is fine. But when it turns into tearing up race cars, that part nobody wants to see happen."

The pair will face off in this afternoon’s NASCAR Nationwide Series “Zippo 200,” where neither has a stake in the championship and thus, little to lose. They’ll go at it again tomorrow in the Sprint Cup Series “Heluva Good Sour Cream Dips at the Glen.” Stayed tuned, race fans, this could get interesting.