Pastrana Will Not Return In 2011 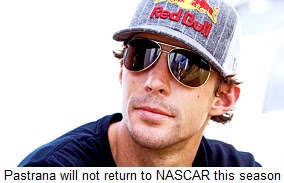 The 11-time X Games gold medalist broke his right ankle and foot while attempting a Rodeo 720 with a back flip during the Best Trick competition in Los Angeles, forcing him to miss his scheduled NASCAR Nationwide Series debut at Lucas Oil Raceway in Indianapolis last Saturday. He underwent surgery Wednesday evening at Riva Road Surgical Center in Annapolis, Md., with Dr. Tom Dennis calling the operation a success and adding that Pastrana should make a full recovery. His leg and ankle will be immobilized in traction for at least a month and he will be unable to bear weight on his right leg for at least another month.

Pastrana Waltrip Racing co-owner Michael Waltrip had initially said Pastrana could return in time for the September 9 Nationwide event at Richmond International Raceway, but that time frame has now been ruled out.

“To give my ankle and foot time to heal properly, we have decided to wait until 2012 to make my NASCAR debut,” said Pastrana. “I probably could have been ready for the final couple of races in 2011, but it makes more sense to start fresh in 2012. We are already starting to talk about testing and what I need to do to prepare for next season. My sincere apologies go out to my NASCAR team, fans and sponsors for this delay. Thanks for all of the support. This will be a fun ride … eventually.”

Pastrana made his NASCAR debut on January 29 with a sixth-place finish in the Toyota All-Star Showdown at California's Irwindale Speedway. He was scheduled to run seven Nationwide Series races this season.
Posted by Dave Moody at 10:42 AM