Patrick Headed For NASCAR In 2012

It appears that Danica Patrick is finally ready to make a decision on her plans for the 2012 racing season. 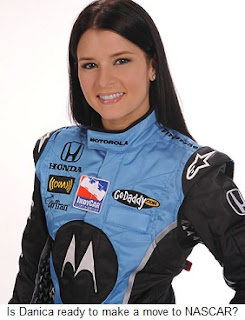 Published reports say -– and multiple sources confirm to SiriusXM NASCAR Radio’s Sirius Speedway with Dave Moody -- that the IndyCar star is ready to abandon her Open Wheel career in favor of a full-time schedule of NASCAR Nationwide Series Racing next season, while also making a limited number starts on the NASCAR Sprint Cup Series.

Her Nationwide ride is expected to be with JR Motorsports, which has fielded cars for her in each of the last two seasons. Team owner Dale Earnhardt, Jr., hinted strongly last weekend that things were coming together for a full-time NASCAR effort next season, saying, "I haven't heard anything, (but) I feel confident that she's happy with what we're doing and I think things are looking positive for us to put something together. I would like for her to run full time and I'm sure she is considering that and I think she would enjoy it.”

In addition to a championship run on the Nationwide tour with JR Motorsports, Patrick will reportedly run a limited schedule of Sprint Cup events in Stewart-Haas Racing Chevrolet. The move would be disastrous for the IZOD IndyCar Series, which has marketed Patrick as its most visible and marketable star for years.
Posted by Dave Moody at 2:04 PM