The asphalt is still warm from Kyle Busch’s victory burnout following Sunday’s Pure Michigan 400, but that hasn’t stopped Michigan International Speedway from moving toward next season.

Crews are hard at work today removing the SAFER barriers surrounding the two-mile D-shaped oval in preparation for a complete repave of the speedway; a project that will be completed in time for next June's return of the NASCAR Sprint Cup and Nationwide Series. Pit road was repaved following the June NASCAR Sprint Cup weekend, and now, nearly 5,600 feet of SAFER barrier are being removed from the outside wall. Inside-wall barriers, pit-in and at pit-out barriers will remain in place during the resurfacing.

A laser survey of the existing track surface has charted approximately 100 million data points, allowing engineers to replicate the original pavement almost exactly, while still removing and dips and bumps that have occurred over time. Interestingly, that laser mapping revealed that MIS actually has variable banking in its 18-degree turns, allowing cars to carry more speed through the turns and utilize multiple racing grooves. 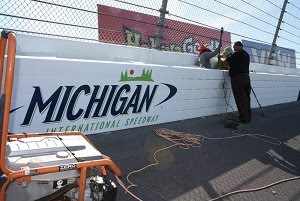 This will mark the fourth time Michigan International Speedway has been repaved since being constructed in 1968. Prior resurfacing projects took place in 1977, 1986 and 1995. “We had some great racing this year; most recently with 20 lead changes and three- and four-wide racing throughout the Pure Michigan 400,” said track President Roger Curtis today. Drivers love this racetrack, so it’s exciting to start another chapter for MIS – a new racing surface.”