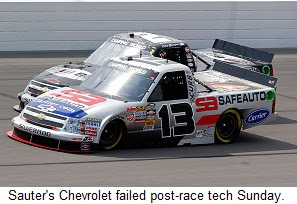 Johnny Sauter forfeited his spot at the top of the NASCAR Camping World Truck Series standings today, after being penalized for a rule violation last weekend at Pocono Raceway. Sauter’s truck failed to meet the maximum post race right-rear bed panel height requirement as mandated in the 2011 NASCAR rule book.

The truck in question was the team’s backup truck, after Sauter hit the wall in qualifying Saturday. His crew was forced to transfer much of the trucks suspension and running gear from truck to truck, finishing mere minutes before pushing to the grid for the start of the race. Crew chief Joe Shear has been fined $5,000, and Sauter and owner Mike Curb have been docked six championship driver and owner points. The penalty pushes Austin Dillon into the series championship lead by a single point over Sauter.