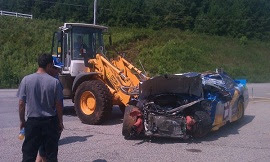 Penske Racing driver Brad Keselowski was transported to a local hospital today after a hard crash during testing at the Road Atlanta road course in Braselton, GA. Keselowski's Miller Lite Dodge was one of a number of Sprint Cup cars testing at Road Atlanta today, and hit a non-SAFER barrier equipped retaining wall virtually head-on at approximately 100 mph after suffering brake failure in a high-speed section of the course. Despite exiting the car under his own power, Keselowski was airlifted to an Atlanta area hospital for evaluation. His injuries are believed to be confined to bumps and bruises, and he should be cleared to compete this weekend at Pocono Raceway. 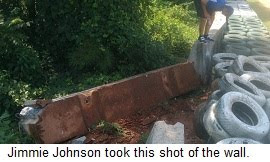 Keselowski, one of NASCAR's most prolific social networkers, commented on the crash in a Twitter post this afternoon, writing, "Guess I needed a reminder. COT or not, this racing s--t is still dangerous." He also posted a photo of a severe abrasion on his knee and badly swollen ankle. He also suffered an undisclosed injury to his foot, but x-rays reportedly showed no broken bones.
Posted by Dave Moody at 1:56 PM