Don’t look now, but Brad Keselowski is a lock for the 2011 Chase for the NASCAR Sprint Cup. He’s also looking like a sure-fire contender for the championship. 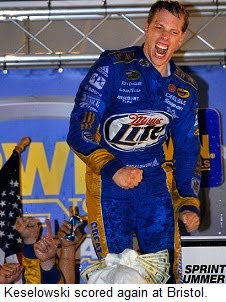 Just days after a respectable -- if unremarkable – ninth-place finish in the “Brickyard 400’ at Indianapolis Motor Speedway, Keselowski rode out a savage testing crash at Road Atlanta that left him with an ugly avulsion fracture of his left ankle and an injured lower back. A virtual non-factor in the postseason discussion, he languished 21st in championship points coming out of the Brickyard and showed little sign of being able to improve his position significantly.

If there ever was a driver going nowhere in a hurry, it was Brad Keselowski.

Since then, however, the Michigan native has suddenly become the hottest driver in NASCAR. Like the proverbial phoenix rising from the ashes, he claimed a fairytale victory at Pocono Raceway just four days after his Road Atlanta crash. That Cinderella win pushed him back into the “Wildcard Eligible” Top-20 in championship points, and the following week, he delivered another ironman performance, finishing second to Marcos Ambrose at Watkins Glen International. A third-place finish on home turf at Michigan set the stage for his third victory of the season – and second in the last four races – Saturday night, when he outslugged the best in the business on one of NASCAR toughest short tracks to win the “Irwin Tools Night Race” at Bristol Motor Speedway. Keselowski led seven times for 89 laps in the race and was never headed in the final 80 circuits, despite a pair of double-file restarts in the late going.

In four short weeks, Keselowski has surged from 21st to 11th in Sprint Cup points. His three wins make him a virtual lock for the post-season Chase, assuming he is able to maintain his Top-20 status for two more weeks. He also stands just 21 points behind a fast-fading Tony Stewart for 10th place in the standings, and if he is able to maintain his torrid pace into the postseason, Keselowski could mount a serious challenge to Jimmie Johnson’s bid for an unprecedented sixth consecutive series title. 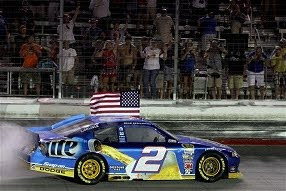 He climbed onto the roof of his winning Miller Lite Dodge in Victory Lane Saturday, thrusting his fists into the air before leaping to the ground amid an exuberant knot of crewmembers. A grimace of pain crossed his face as he landed, evidence that his troublesome left ankle is still far from healed. But that stab of pain was quickly replaced by the thrill of victory and the knowledge that he and his Penske Racing team have suddenly become true championship contenders.

"Wow! The night race at Bristol!" said a beaming Keselowski in Victory Lane. "I used to watch Tony Stewart and Jeff Gordon and Dale Earnhardt win this race. This is a race of champions. I can't believe it! There are races that pay more. There are races that have a little more prestige, but this is the coolest damn one of them all!"

The second-generation driver attributed his recent competitive surge to "a team that starts to click and believe in each other. I believed in (crew chief) Paul (Wolfe) since we started this year, and we’ve made good adjustments to our cars over the last few months. We made good adjustments to our car during (tonight’s) race and found ourselves in Victory Lane. I can't believe it; I just can't."

Keselowski now has four Sprint Cup victories in just 77 career starts, and is peaking at a time tailor-made for title contention. “Those guys are on a roll,” said third-place Bristol finisher Jeff Gordon, a man who knows a thing or two (or four) about winning Cup championships. “They're running strong and if you put them in position at the end of the race, they're going to pull off the wins. To me, they’re as strong a team as is out there right now. We have to keep an eye on him.”

“We've definitely got things going for us right now,” admitted crew chief Wolfe Saturday night. “It's weird, because we’re not really doing anything different. It's been a lot of small things over the past couple months just starting to add up. We've got fast race cars, the driver is doing his part, the pit crew is doing their part, and we're making good calls on pit road and adjustments. We continue to bring good race cars to the race track every week (so) Brad can go out there and do his part.”

Like Johnson in each of the last five seasons, Keselowski and his Miller Lite team have caught fire when it matters most, and while a lot can change in the next 14 races, they may give team owner Roger Penske his best chance yet to claim the NASCAR championship that has eluded him for decades.

“I think we have the potential (to win the title),” said Keselowski. “It's an honor just to be in the Chase and I'm going to have fun with it. At the start of the year, it was certainly one of our goals. And to come in on a high note is just great.

“Past success does not guarantee future success, and I'm a big believer in that. But it sure as hell doesn't hurt.”