Sirius XM NASCAR Radio’s Sirius Speedway with Dave Moody has learned that North Carolina’s Rockingham Speedway will begin installing SAFER Barrier technology within the next 30 days, likely as a precursor to hosting a race on the 2012 NASCAR Camping World Truck Series. 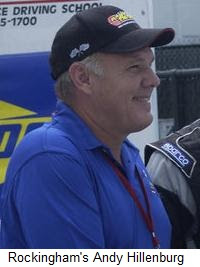 Rockingham owner Andy Hillenburg confirmed today that he has secured financing for the project and will begin installation of the impact-absorbing barriers next month. The barriers will be installed in all four corners of the speedway, and on the inside of the backstretch, and should be completed in late December.

Hillenburg declined to discuss the possibility of a Camping World Truck Series race at the 46-year old facility, saying, “I don’t have anything like that to announce at this time." Multiple sources say that talks have taken place with NASCAR about placing Rockingham on the 2012 Truck Series schedule, however, with an spring date likely. The only stumbling block to a sanction agreement between Hillenburg and NASCAR was the installation of SAFER barriers, and with that hurdle now effectively cleared, sources say the deal could be done in a matter of days.

Rockingham has not hosted a NASCAR race since February 22, 2004, when Matt Kenseth drove his DeWalt Ford to Victory Lane in the Subway 400. Since then, the track has hosted events on the ARCA, USAR Pro Cup, CRA Late Model and Frank Kimmel Street Stock Series, and is home to Hillenburg’s Fast Track High Performance Driving School. The one-mile oval and companion half-mile short track – built in 2008 – are popular testing venues for many NASCAR teams.

Rockingham is not the only track interested in filling open dates on the 2012 Camping World Truck Series calendar. Mobile (AL) International Speedway promoter Rick Crawford confirmed today that he has spoken to NASCAR about the possibility of acquiring a spot on the 2012 schedule, as well. The former Truck Series driver said he would double his track’s current 9,000-seat capacity, in an effort to bring the Trucks back to what he called “their short-track roots. I think it would be a plus for everybody,” said Crawford. "We’re starving for NASCAR action down here on the Gulf Coast, and if we can get a race done, I’m sure it would be a hit.”

There is also a possibility that both the Nationwide and Truck Series could return to Lucas Oil Raceway in Indianapolis next season. Options under consideration include a Truck/ARCA/USAC tripleheader during Brickyard 400 weekend at nearby Indianapolis Motor Speedway, and a return of the Nationwide Series to LOR the weekend before the Indianapolis 500. Sources say the track will agree to host a Camping World Truck Series event in 2012, but only if they also receive a date on the Nationwide schedule.