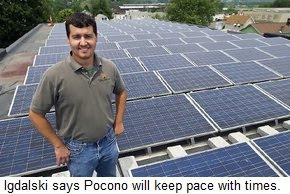 Pocono Raceway President Brandon Igdalski told Sirius XM NASCAR Radio’s Sirius Speedway with Dave Moody that cutting the track’s two NASCAR Sprint Cup Series races from 500 miles to 400 next season is “being considered. We’re looking at things, but we haven’t made that decision quite yet,” said Igdalski. “We’re looking at it for the future, whether it’s this year, next year, or a couple of years down the road. It’s a different sport and a different time than it was years ago, and we’re always looking at things.”

Igdalski took the helm of the historic tri-oval when his grandfather, track founder Dr. Joseph Mattioli, announced his retirement Friday. Igdalski said he was unaware of his grandfather’s plans, adding, “We got a call about 30 minutes beforehand saying, `Be in the Media Center in half an hour.’ I had no idea he was going to retire. My jaw hit the ground.”

Igdalski said he will gradually implement some new ideas and more modern fan amenities at Pocono over time, after traveling the circuit and seeing what other promoters have done.