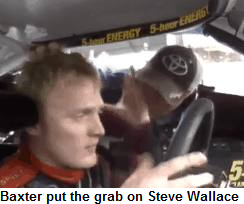 The skirmish followed an on-track incident involving Wallace and Pastrana-Waltrip Racing driver Patrick Carpentier in which Wallace made a three-wide move in the track's first turn, resulting in a crash that sidelined Carpentier's NAPA Auto Parts Toyota. Baxter approached Wallace while the third-generation driver was still strapped inside his race car after recording a career-best fourth place finish, grabbing him briefly by the hair.

"I got underneath (Carpentier), I tried to out-brake him and he crowded me," said Wallace afterward. "I got loose and I spun him out. Obviously, Baxter was upset. I'd be upset. Only girls pull hair, (though), so I don't know what to say about that."

“I’m sorry for what happened after the race on Saturday and I take responsibility for my own actions," said Baxter in a written statement today. "I called Steve today and apologized. I was just very frustrated and let my emotions get to me. That was Patrick’s last race and we wanted to make it special. We really thought he had a shot for the win and everything boiled over when that chance went away in the wreck. Everyone was just racing hard and there was no intent to wreck anyone. There’s no excuse for what I did after the race and I apologize to everyone.”

Pastrana Waltrip Racing co-owner Michael Waltrip also commented on the incident, saying, "Pastrana Waltrip Racing prides itself on racing hard, but we always want to be good sports. Jerry Baxter is very passionate about our race team, but what he did after Saturday’s race was wrong and he knows it. I talked to him about it that night and again today. I understand how emotional you can get behind the wheel or up on the pit box, I’ve been there. But you have to draw a line, and Jerry crossed that line. It’s not what we are all about. I apologize to Steve Wallace and all his fans as well as all NASCAR fans.”

NASCAR has not commented on the incident. Penalties, if any, are expected to be announced Tuesday.