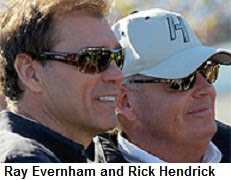 Evernham has spent this season away from the NASCAR garage, working as a consultant for the Hendrick Companies overseeing strategic initiatives for Hendrick's auto dealerships and aftermarket retail business, while driving his own Sprint Car in a limited schedule of events, He said his driving career could come to an end int he near future, however, as he transitions back to NASCAR in 2013.

"I've got six or seven more Sprint Car races before the end of the year, then I'm probably going to have to make a decision about how much I'm going to race next year," said Evernham. "I'd like to get back to the (NASCAR) race track more in 2012, so I think my Sprint car racing is going to suffer."

Evernham said he has no desire to return to the crew chief ranks, saying his role will be unofficial and undefined. "I will have no real official capacity, other than being a part of Hendrick Motorsports," he said. "I want to help if I can, and advise here and there. Kasey (Kahne) is going over there next year, and I think I might be able to help with some of the transition."

Evernham said his relationship with Kahne -- for whom he fielded cars at Evernham Motorsports beginning in 2003 -- remains strong. "I feel a responsibility to Kasey Kahne to make sure he's got a shot at winning the championship," he said. "I believe in him, and it'll be good to be back at the track a little bit more next year. But honestly, there will be no official capacity. I will just be a part of that Hendrick team, doing whatever they need and being friends with Mr. Hendrick."
Posted by Dave Moody at 11:17 AM