The courtship is over and a the decision has been made. Carl Edwards will remain with Roush Fenway Racing. 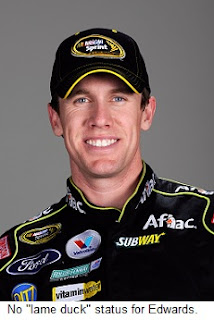 Sources within Roush Fenway Racing tell Sirius XM NASCAR Radio’s Sirius Speedway with Dave Moody that the driver will sign a new, multi-year contract to remain in RFR Fords for at least the next three years, at a reported $10 million per season. Edwards’ current contract expires at the end of the 2011 campaign, and he has negotiated with both Roush Fenway and Joe Gibbs Racing in recent weeks. Both teams made generous – but basically equal -- financial offers, and an RFR source speaking on the condition of anonymity said his unwillingness to jeopardize the 2011 Sprint Cup championship effort played a major role in swaying Edwards to remain in the RFR camp.

The current NASCAR Sprint Cup Series point leader has said repeatedly said he would sign with the team that offers him the best chance to contend for championships, and an unwillingness to turn his 2010 title bid into a lame-duck endeavor was a leading factor in his decision to re-sign with Roush Fenway. 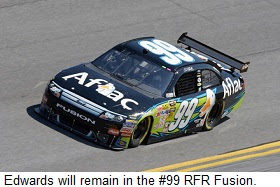 Last night, team owner Jack Roush appeared on SPEED’s NASCAR Race Hub and hinted that a decision could be imminent, saying, "There's a great future for (Carl) with Roush Fenway. We have a lot of momentum in the relationship (and) we certainly don't look forward to rebuilding another relationship with somebody else in the 99 car. We have a huge investment, as he does in us.”

Edwards has spent his entire Sprint Cup career with RFR, after being promoted from the Nationwide Series to replace departing veteran Jeff Burton in 2004. His first start with the team came in the GFS Marketplace 400 at Michigan International Speedway on August 22 of that year, finishing 10th and setting the stage for as career that has seen him become the lead driver in RFR’s four-driver stable. He has been a Top-12 finisher in championship points every year since 2005 and has failed to qualify for the Chase only once, in 2006. He currently holds an 11-point lead over defending series champion Jimmie Johnson, and will make his 250th Sprint Cup start at Pocono Sunday.

Ford Motor Company recently opened its financial coffers to help Roush Fenway re-sign Edwards, making what Ford Racing Director of Communication Kevin Kennedy called “an offer we have never done before for another driver.'' The new contract will reportedly be worth in excess of $30 million over three seasons, with an additional $10 million signing bonus.
Posted by Dave Moody at 8:32 AM