Marcos Ambrose Is A NASCAR Winner

Vindication is sweet for Marcos Ambrose. 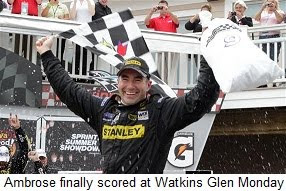 Recognized as one of the most gifted road racers in the world, the former Australian V8 Supercar champion has flirted with victory in virtually all of his previous Sprint Cup Series road course starts. He gave away a sure win at Infineon Raceway last season after shutting his engine off under caution in an attempt to save fuel, only to have it refuse to restart. He has never finished worse than third at Watkins Glen, but those “close but no cigar” finishes did nothing to diminish the pressure he felt to perform.

In fact, they compounded it.

“I’ve felt the weight of expectation and pressure to win,” said Ambrose Sunday, just minutes after passing Kyle Busch and Brad Keselowski with an all-or-nothing final lap charge to win the Heluva Good Sour Cream Dips at The Glen. “Sometimes that clouds judgment. I know I’ve tripped myself up once or twice, trying to get to Victory Lane here in the Cup Series.

“It’s not that I was worried, but the word ‘choke’ was starting to creep into the back of my mind.”

Ambrose was clearly the class of the field Monday, starting third and forging a comfortable lead in the early laps before surrendering the advantage as part of crewchief Todd Parrott’s “don’t beat ourselves” fuel strategy. He raced back through the field with surgical efficiency, leading four times for a total of 28 laps, then outgunned – and out-thought – Busch and Keselowski down the stretch to claim his much-anticipated first NASCAR Sprint Cup Series win.

“We survived today,” said the beaming Aussie afterward, crediting a final caution for Paul Menard’s Turn Four crash for allowing him to cool his overworked brakes and prepare himself for an uncharacteristic miscue by leader Busch on the final restart. “I knew I was never going to out-brake the 18,” he said. “I tried to blend in behind him. He was going to saddle off there and try to win the race, and that’s exactly what he did.

“With Brad, I just got through the bus stop really good and forced the issue on him,” said the champagne-soaked Richard Petty Motorsports driver. “I never touched him, I don’t think. I got him aero free and I was able to slide past. It was just a dream day, and I’m very thankful for the opportunity to be here.”

It’s been a long and sometimes rocky road for Ambrose, who abandoned a lucrative career as perennial V8 Supercar titlist to take his shot at American stock car glory. Over the last four seasons, he has shown the potential to crack Victory Lane numerous times, but as the old saying goes, “Potential means you haven’t done it yet.”

Now, Ambrose is a winner at last, winning a race that ironically – like his NASCAR career – took a little extra time to complete.