Sirius XM NASCAR Radio’s Sirius Speedway with Dave Moody has learned that Germain Racing majority owner Bob German will form a new NASCAR National Series team in conjunction with Naples, Fla., resident O.B. Osceola, Jr. The team, to be called Germain-Osceola Racing, hopes to field an entry in 2012 on the NASCAR Sprint Cup, Nationwide or Camping World Truck Series in 2012 for a still unnamed driver, with backing projected to come from from a number of Native American tribes.

Osceola is President of Pro Investment Group International and CEO of Pro Games, LLC, and has been instrumental in constructing and managing a number of large-scale projects for the Seminole Tribe of Florida, including fundraising and construction for Florida’s Immokalee Casino, and overseeing the tribe’s ownership of the worldwide Hard Rock and Hollywood Hotel/Casino franchises. “O.B.’s grandfather was Chief of the Seminole tribe for many, many years, and O.B. is active on the Seminole Tribal Council,” said Germain. “He has a lot of pull with Seminole Gaming, which owns all the Hard Rock Cafes in the world and many other casinos and resorts. The tribes have casinos all over the country, and for some reason, even in a down economy like we’re in right now, they’re remain very consistent (financially). They seem to be doing very well. 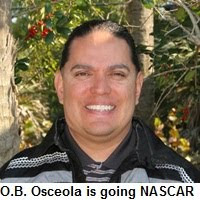 "O.B. is the first Native American NASCAR team owner, and he’s going out and soliciting all these tribes around the country. O.B.’s a cool guy, he loves racing, and the tribes have been very, very supportive of what we’re trying to do. Everybody’s wanting to see proposals from us. The reception has been great.”

Germain said the new team operate as a subsidiary of Germain Racing, with sponsorship flowing – at least for now -- into the existing race team, which fields Sprint Cup Toyota Camrys for Casey Mears, Mike Skinner and TJ Bell, and Camping World Truck Series Tundras for former series champion Todd Bodine, Brendan Gaughan and Max Papis. “At least initially, Germain Racing will build cars for Germain-Osceola Racing,” he said. “The tribes tend to support each other’s business ventures… (and) we’re talking about fielding a car that will be sponsored by all the different tribes to promote their casinos around the country.”

He said Germain-Osceola Racing will make its NASCAR debut later this season, fielding a Hard Rock Vodka-sponsored Nationwide Series entry in the 2011 season finale at Homestead-Miami Speedway. “That will be done as part of a launch for a new, Hard Rock-branded Vodka that’s coming out,” said Germain. “There are a lot of good things going on there, and I really think we’re onto something. It’s something new for NASCAR, and I think we’re going to see a lot of good things come out of this program.”