Mattoili Resigns, Turns Control Of Pocono Over To Grandchildren

Pocono Raceway founder and owner Dr. Joseph Mattioli resigned unexpectedly Friday, handing over the operation of the venerable Pennsylvania speedway to his grandchildren. 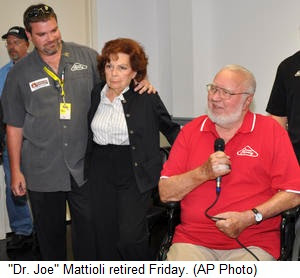 Mattioli said last season that he had placed the speedway in trust, preventing his heirs from selling the track to International Speedway Corporation, Speedway Motorsports, Inc., or any other buyer. "I put it in trust," said Mattioli in a recent interview with the Philadelphia Inquirer. "(The grandchildren) can't touch it. They can't sell it. The (SOBs) are going to run it, or they're going to starve."

The 87-year-old patriarch battled to maintain composure while announcing his resignation Friday, clutching the hand of his wife, Dr. Rose Mattioli. The Philadelphia dentist and his wife broke ground on a 2.5-mile tri-oval in 1969, combining the characteristics of three of the era's most successful tracks. Turn One was modeled after the former Trenton (NJ) Speedway and Turn Two -- also known as "The Tunnel Turn" -- was copied from Indianapolis Motor Speedway. Turn Three is similar to the legendary Milwaukee Mile, and the track was laid out in a virtual triangle. Its sharp corners and long straightaways make it one of the most unique and challenging courses in all of NASCAR.

Pocono hosted major, open wheel events under the USAC, CART and Champ Car World Series banners from 1971 to 1989, and NASCAR Sprint Cup Series events since its opening in 1971. It also hosted the legendary Race of Champions modified race from 1977 to 1991, first on the 2.5-mile tri-oval, then later on a three-quarter mile infield oval.

Grandson Brandon Igdalsky will add the title of CEO to his current role as track president,
Posted by Dave Moody at 11:56 AM