Kyle Busch’s pursuit of the 2011 NASCAR Sprint Cup Series championship will clearly not lack for excitement. 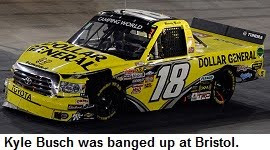 One day after pleading guilty to speeding and "no contest" to careless and reckless driving from a 128 mph traffic stop back in May, the resident “Peck’s Bad Boy” of NASCAR added another item to his lengthy list of distractions Wednesday night, wading hip-deep into an on-track controversy with Elliott Sadler that somehow swept-up Sadler’s Nationwide Series car owner, Kevin Harvick, as well.

The dust-up began midway in the Camping World Truck Series “O’Reilly 200” at Bristol Motor Speedway, when Busch slid up the track and across the nose of Sadler while battling for position near the front of the pack. Contact between the two turned Busch into the wall, doing significant damage to the right-front corner of his Dollar General Toyota. Busch limped his damaged machine around the track for a lap or two until Sadler attempted to pass, then harpooned Sadler’s Joe Dennett Motorsports Chevrolet in retaliation. As Sadler spun, Busch swerved and hit Sadler again, for good measure.

Busch pulled no punches after the race, either, blaming Sadler for the initial crash. “The spotter said I was clear,” he said. “I was clear at the time. Maybe I was too late (moving up the track), but he hooked me anyway and wrecked me. I’m not going to put up with it.” Busch admitted wrecking the Virginia native in retaliation, and dragged race winner and longtime rival Harvick into the fray as well. Asked if he believed Sadler had wrecked him intentionally, Busch said, “Yeah, I’m sure he did. Where does his paycheck come from?”

“He wrecked himself, to be honest with you,” countered Sadler in a measured, post-race interview worthy of the Nobel Peace Prize. “His spotter actually came to us and told us it was his fault, (saying) he didn’t let him know we were there. I’ve never had any issue at all racing with Kyle Busch. He’s a heck of a racecar driver.” 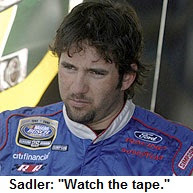 “I understand his frustration,” said Sadler, who rebounded from the mid-race fireworks to finish ninth. “When I went into Turn 1, I was kind of waiting for (retaliation) because I figured he was upset and frustrated. It cost us a chance to win, but it’s OK. I was mad (and), I was frustrated because I don’t think he understood the circumstances when he spun me out. “I was like, ‘Man, don’t spin me out. Watch the tape first.’ But it’s all right. I know he’s a very competitive driver and a good race car driver. We’ve never had any issues before at all. Just tonight.”

He bristled at the implication that his KHI connection played a role in the crash, however, saying, “I race for me to race. I don’t get caught up in this hoo-boo for Kyle Busch.”

Harvick also scoffed at Busch’s conspiracy theory, saying, “That shows you how smart Kyle Busch is. Elliott wasn’t even driving for us tonight. Joe Denette owns that truck, and those guys came here tonight to do what they had to do.” He also made it clear that his on and off-track rivalry with Busch will continue for the foreseeable future, saying, “We can race as dirty as Kyle Busch wants.”