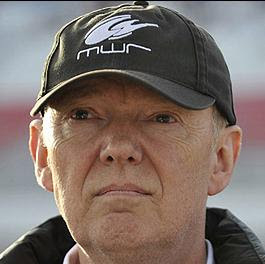 Michael Waltrip Racing Vice President of Competition Steve Hallam will leave the team to take a new post as Managing Director of Walkinshaw Racing, whose Toll Holden and Bundaberg Racing teams field factory Holden entries on the Australian V8 Supercar Series. Hallam has been with MWR since 2009, coming to the team after heading up McLaren’s Formula One program from 1998-2008 for drivers Ayrton Senna, Nelson Piquet, Nigel Mansell and Mika Hakkinen.

“I have always considered the V8 Supercar series as one of the ‘classic’ racing series,” said Hallam of the move. "Having been fortunate to have worked with some of the great brands in motorsport, it is with real excitement I have accepted the role of Managing Director for Walkinshaw Racing. The Toll Holden Racing team has exceptional history and we have terrific talent throughout the organization. When this opportunity was presented, it was one that I couldn’t let pass. I look forward to getting on the ground in Australia, and start contributing to the future success of the team.”

In a FOXSports interview today, Walkinshaw Racing co-owner Ryan Walkinshaw said he is pleased to have Hallam taking the helm. “Someone with Steve’s pedigree in engineering and race operations, as well as has general management capabilities makes him a great leader for our organization,” said Walkinshaw. “Everyone in the team is looking forward to working with him. Steve’s wealth of experience with truly exceptional racing outfits is exactly what we were looking for when we began our search.”