Boris On Biffle: "He’s Going To Fight Me Like A Man Someday."

Greg Biffle and Boris Said took NASCAR’s “Boys Have At It” era to a new level Monday, engaging in a post-race scuffle that ended with Said promising to “go see him at his house and (give him)... a freakin’ whooping.” 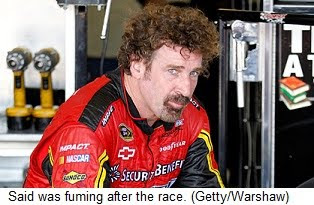 Biffle lost a lap early in Monday’s rain delayed “Heluva Good Sour Cream Dips At The Glen” after running out of fuel under caution and having to be pushed back to the pits. He then angered Said by racing the road course specialist harder than Said thought necessary, leading to harsh words, pushing and shoving between the drivers and their teams after the race.

“He was flipping me off, giving me the finger, (being) totally unprofessional, a few laps down,” said Said. “He’s a chump... the most unprofessional little scaredy cat I’ve ever seen in my life. He wouldn’t even fight me like a man. If somebody texts me his address, I’ll go see him Wednesday at his house and show him what he really needs. He needs a freakin’ whooping, and I’m going to give it to him.”

Said also played a leading role in a savage final-lap crash that saw David Ragan and David Reutimann slam head-on into the Turn Two guardrail, with Reutimann’s Michael Waltrip RacingToyota cartwheeling across the track and into the opposite guardrail before bursting briefly into flames. Neither driver was injured, but Biffle and Ragan immediately blamed Said for the crash. “He just hooked us,” said Ragan. “He certainly could have given a little more of a break and we all could have gotten through there and not torn up anything. But he was aggressive. We were all aggressive.’’ 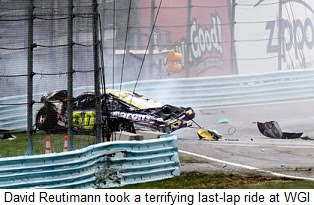 "I want to make sure everyone sees the wreck between David and David," said Biffle in a post-race Twitter posting. "That's coming from a guy (who) says I am unprofessional. Let me tell you something, Boris `the road course ringer’ caused that wreck. He did the same thing to me earlier in the race off the carousel. …Then Mr. Class pulls in behind my truck after the race today? Shouldn't you go check on David and David? How unprofessional and disrespectful!"

Said denied causing the crash, saying “The #6 car was getting into me a lot. I didn't want to wreck him, but I had to stay on the track and he didn't give me any room. We collided. That is the only thing I feel bad about.” He also accused Biffle of punching him immediately after the race, saying, “He wouldn't even let me get out of the car. He comes over and throws a few little baby punches, then when I get out, he runs away and hides behind some big guys.

“He won't hide from me long. I’ll find him. I won't settle it out on the track. It's not right to wreck cars. But he'll show up at a race with a black eye one of these days. I'll see him somewhere.”

In a post-race interview with Sirius XM NASCAR Radio, Said claimed that he and Biffle had issues dating back to last year’s race at The Glen. “Last year, I went down into Turn One three wide and passed him,” said Said. “He got mad because he says I’m not a regular and I shouldn’t be racing the regulars that hard. But I was racing the Red Bull car... and they pay me to drive at 100 percent, not to roll over for some regular. I’m not doing my job if I don’t try 100 percent. So he was still sore about that I guess... and he had a lot of time to think about it because he was two laps down.”

Said’s crew chief, Nick Harrison, said his driver was upset before the race ended, sending a message through his spotter that he would be looking for the Roush Fenway Racing driver after the checkered flag. "Biffle had run out of gas and was multiple laps down and was racing Boris,” said Harrison. “Boris thought that was dirty, so Boris relayed a message to the spotter he wanted to meet him after the race."

“I give guys respect when they deserve respect,” said Said. “As far as Greg Biffle’s concerned, I’m not going to be happy until I whomp him. And I am going to whomp him sometime when he least expects it. He’s going to fight me like a man someday. Not at the track, not where we get fined, but someday. He’s supposed to be a champion, (but) that’s a joke.”