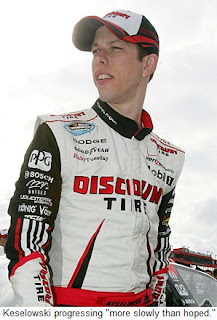 Kurt Busch will substitute for injured Penske Racing teammate Brad Keselowski Saturday, driving the #22 Discount Tire/Ruby Tuesday Dodge in the NASCAR Nationwide Series Zippo 200 at Watkins Glen International. Keselowski continues to recuperate from an avulsion fracture of the left ankle suffered in a testing crash last week, and Busch said he is happy to help his teammate out by allowing an extra day of healing before Sunday’s Sprint Cup race.

“I have always tried to be a great team player throughout my career,” sand Busch, “and with the incredible effort Brad put forth in winning Sunday’s race at Pocono, we think it’s a smart move to let him focus on just the Sprint Cup action this weekend.”

Keselowski also commented on the decision today in a Twitter post, saying that after a physical therapy session yesterday evening, it became obvious that he is progressing more slowly than hoped. While admittedly showing improvement, Sunday’s Good Sam RV Insurance 500 winner said driving continues to “severely aggravate” both his ankle and back. In his words, “Rather than take two steps forward with rehab and two back (by running both Nationwide and Sprint Cup this weekend, it’ll be) just Cup.”

Busch won the most recent Sprint Cup road race at California's Infineon Raceway in late June, and also carried the checkered flag in his last Nationwide start at Watkin's Glen in 2006. Penske Racing President Tim Cindric said, “Penske Racing is fortunate that Kurt, who is a former NNS winner at Watkins Glen, is in its stable of drivers. We appreciate him lending a hand during this time. We will continue to monitor Brad’s recovery. His NNS schedule will be determined on a race-by-race basis.”